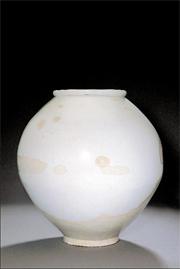 Just as silence can convey profound thought, the use of empty space in art can act as a powerful indicator of ideas, emotions and feelings.
This theme is explored in depth at an exhibition entitled “Void in Korean Art” at Leeum, Samsung Museum of Art in Seoul through to Jan. 27 next year.
It’s a compelling collection that encapsulates the inherent spirit of Korean art by looking at the relationship between void and form in terms of the artists’ views on life and death, materialism and spirituality.
The use of the void in Korean art sums up a classic sentiment of Korean philosophy: Tell the story by saying as little as possible.
This philosophy is embedded within traditional Korean art. Empty space is used to maximize emotional impact in much the same way the Impressionists attempted to convey feelings and thoughts. But Korean art is more extreme in its use of void.
Art historians in Korea use the term “unpainted painting” to describe the way empty space can be viewed as physical entity.
In the current exhibit at Leeum, the concept of the “void” is broken into themes of nature, freedom and imagination, bringing together Korean artworks that span different periods and genres.
The result is a powerful retrospective that redefines the aesthetics of Korean identity. 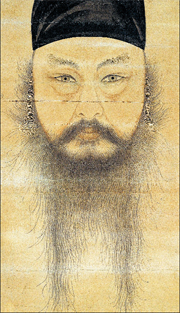 “Self-Portrait” by Yun Du-seo, both from the 18th century. Provided by Leeum

The exhibition starts with representations of landscapes in Korean paintings using void as an element that stresses the mood of the painting and the depths of nature.
A classic example of this is Jeong Seon’s “The Diamond Mountains Seen from Danbalryeong Pass” painted in 1711, which illustrates the depths of a mountain valley using minimal brush strokes.
Contemporary Korean art like “The West Psyche, Banishment with Passing Flow” (2007) by Rhee Ki-bong follows in this tradition, blurring the painting of a tree by adding an extra layer of Plexiglas between the canvases to evoke the distances between the trees.
One of the best examples of void in modern Korean art is perhaps Chang Uc-chin’s “River” (1987), which depicts a house, a tree, a chicken and a man in equal proportions, suggesting the inextricable link between man and nature.
“From the perspective of Western art, the void in Asian painting may appear as an absence of form,” says Lee Joon, the museum’s deputy director. “‘Empty space’ implies an absence of physical representation or is synonymous with ‘blank space.’ In theories of art in East Asian painting, however, void exists as a legitimate part of the work.”
The exhibition also looks into the notion of void as a metaphor for contemplation and imagination. It includes Kim Soo-ja’s “A Laundry Woman-Yamuna River, India,” which shows the artist looking at the human excrement and the cremated remains of dead bodies floating on the River Ganges in Northern India.
In Lee Jong-sang’s “Protofiguration 90024-Land” (1990), the artist finds a way of releasing emotion using bold strokes that disintegrate into a free form.
The exhibition is physically arranged to induce the experience of the void. Pebbles are spread on the floor surrounding the “White Porcelain Jar,” an elegant vase that was supposedly used as an oil container during the Joseon Dynasty.
When you step away from viewing paintings by Byron Kim, a Korean-American artist who replicates the colors of Korean celadon, you come face-to-face with an actual celadon, an arresting visual experience.
Another highlight is Chung Dong-suk’s “Full Empty,” (2005-2006) which captures the neon-lit Seoul landscape at night using a simple straight line across a black digital print.
Other exhibits confront our perceptions of what should be. One such example is Ahn Kyu-chul’s “Faraway Water” (1991/2004), a surreal piece that shows a table with two bowls of water standing at each end. The white tablecloth is embroidered with goldfish, suggesting the fish are swimming across the white void, from one bowl to the other.