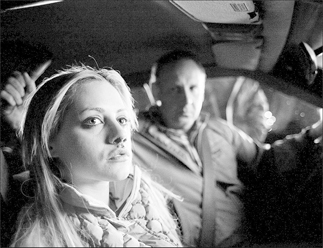 Brittany Murphy gives a spot-on performance as Krista, a rough prostitute who ends up as “The Dead Girl.” Provided by Lakeshore Entertainment

First there was “Love Actually,” which shuttled between the romances among a handful of different Londoners. Then came “Crash,” which was more or less “Hate Actually” with its portrayal of rampant racism and violence in Los Angeles.
Karen Moncrieff’s “The Dead Girl,” on the other hand, could be parsed as “Death Actually:” how one young woman’s brutal murder affects a group of otherwise unrelated women.
Unlike Love Actually or Crash, which dart back and forth between characters and storylines with differing degrees of success, writer and director Moncrieff instead only presents one portrait at a time, only one of whom ― the dead girl ― has anything in common with the others. The result is a film that starts out slow and full of questions, but delves deeply into each character to reveal all in the end.
Moncrieff manages to use the experiences of five women who never meet onscreen ― The Stranger, The Sister, The Wife, The Mother and The Dead Girl ― and devotes a chapter of her film to each to artfully advance the plot of her narrative.
As the film opens, a nobody named Arden (Toni Collette) happens upon a mutilated corpse in her field. But while the lurid scene is reminiscent of last week’s horrible “The Black Dahlia,” The Dead Girl is a completely different breed of movie. In this segment, titled after Arden’s role as “The Stranger,” Moncrieff homes in on the character.
Like in real life, a discovery of a dead body brings an onslaught of media attention to the timid, homely Arden, who wants nothing more than to disappear into her surroundings. Yet despite Arden’s awkward personality, Collette manages to elicit strong feelings of sympathy from her audience.
In fact, the audience can’t help but feel sorry for each of the women in The Dead Girl. Remarkably, Moncrieff manages to devote the same amount of attention (or perhaps more) to each following character. They’re all neglected in some way, which feeds their desire to pin down some sense of resolution from their encounters with the deceased, whom we eventually learn was a prostitute named Krista.
Anyone who has seen Brittany Murphy in such idiotic roles as Stacy in “Little Black Book” or Molly in “Uptown Girls” will be shocked by the rail-thin actress’s turn as Krista. I nearly wrote off the film as trash when I saw her name on the cast, but decided to check it out after I figured she spent most of the film dead.
But the vaguely coked-out gaze of her gigantic eyes underlined by dark circles and ratty blonde hair give her the perfect scrappy look for this role, and Murphy has never been better. While far from being a classy dame, Krista manages to be likable in a shockingly immature way.
At one point, she defends a little girl being tormented by her cruel brother by shoving him when their mother isn’t looking. When the shock of an adult actually stooping to a child’s level wears off, the audience can’t help but root, “Atta girl!” anyway.
Unflaggingly devoted to her three-year-old daughter, Krista’s willing to do anything ― or anyone ― to get a ride to deliver a birthday present, fluffy ballerina bunny doll that conveys surprising tenderness. In fact, it’s this desperation to be a good mom that dooms Krista.
But Murphy isn’t alone in terms of her exceptional performance. There isn’t a weak link in The Dead Girl, from Marcia Gay Harden as Krista’s heartbroken mother, Mary Beth Hurt as a neglected, Bible-thumping wife or even James Franco in his small role as the nice guy who hopes to draw Rose Byrne, The Sister, out of her grieving shell.
With its big-name cast, it’s too bad that The Dead Girl was destined for indie film obscurity upon its 2006 release in the United States. With each consecutive character the audience meets, Moncrieff choreographs a theatrical human pyramid. Each woman’s story stacks on top of the others’, providing clues and insight along the way. And when Murphy finally takes her perch at the pyramid’s zenith to cap off a hauntingly good movie, the audience realizes just how far one death can reach. So here’s to hoping that The Dead Girl reaches out to even more moviegoers in Korea.