Fans of the young

Fans of the young 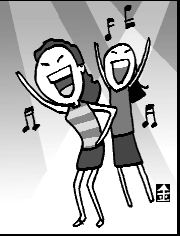 A group of girls is causing a commotion in Korea.
A group of people may be having a heated debate, but when this music starts, everybody becomes relaxed and the mood changes. People sing along with the refrain from the song. The band is Wonder Girls and their dance number, “Tell Me,” is very popular even among those in their 30s and 40s. Many people dance to the song and upload video clips on the Internet.
This communal dance trend reminds us of the 2002 FIFA World Cup, when huge groups of joyful Koreans were dancing together. The main TV news programs and newspapers covered the popularity of “Tell Me.”
The success of “Tell Me” is because of its retro chic. The song is a cover of an ’80s song and is rearranged as disco music. The girls’ clothes and dance style also harken back in time. The name of the band, Wonder Girls, is from Wonder Woman, the heroine of a popular U.S. TV series in the 1970s and 1980s. Naturally, the band and its song attracted grownups in their 30s and 40s. The melody is catchy and the dance is perfect for the song. When people hear the first part of the song, they can’t help bopping their heads.
Some say this phenomenon is from the Lolita complex. Wearing miniskirts, the girls lean their upper bodies forward and shake their shoulders.
There are “older sister fans” and “ajumma fans,” referring to middle-aged women who are crazy about younger celebrities who could be their neices or children.
These ajumma fans take part in the activities of fan clubs and support their idols with their stable financial power.
Adult fandom proves that it is not only teenagers who are crazy about certain entertainment stars. The culture of fandom appeared in the 1970s and 1980s for the first time in Korea. Those who were teenagers then are now middle-aged, so they formed this adult fan culture. Some say there is nothing wrong with this phenomenon, saying it is a harmless and healthy outlet for people to express their desire for youth through their adoration of younger stars.
But still, it is a bit odd that adults are drawn to kids. Adults adore beautiful boys and pretty girls instead of someone their own age. Is it that adults want to deny the fact that they are aging? Probably. They want to indulge in beautiful boys and girls and forget about the pain and pressures of adult life.
Well, the world is indeed a crazy place. It may help to temporarily turn away from it and sing “Tell Me” with these lovely girls.

Who will help if another mask crisis occurs?