An urbane look at the mystery of love

An urbane look at the mystery of love 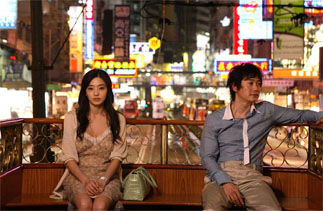 The film “Changing Partners,” the English title of a recently released Korean DVD, examines the question, “Do you live with someone you love now?”
To read between the lines and put it more bluntly, the question it explores is really, “Are you married for money or love?”
In this case most Koreans are probably guilty as charged. At least that’s the explanation for the 430,000 ticket buyers on the film’s opening weekend in nationwide theaters.
If you married for love, perhaps there’s no point in paying 8,000 won ($9) to watch a married couple in a scandal.
The film involves two young couples who are stable and bored. By meeting each other, they discover what has been missing in their own marriages.
Indeed, the idea of cross-affair is a clever hook. It allows viewers to safely enjoy the film while holding their judgment for two hours.
The affair ― there are two ― are civilized affairs. While the characters do hesitate between guilt and desire, their marriage barriers are nothing compared to what couples usually go through in Korean dramas ― where those caught having an affair often end up in punch-ups.
But this is an urbane romance, and part of the film’s strength comes from its refined style.
The film does an enviable job in this respect.
The nightscape images of the film’s urban settings, which go back and forth between Seoul and Hong Kong, are romantic and charming, like the short-lived affairs.
From the familiar landmarks of Seoul to the glamorous jobs of the film’s characters ― hotelier, lighting designer, fashion consultant and construction firm boss ― the film has everything to do with an urbane sense of our reality. But more importantly, it offers an amusing insight into how class is defined in contemporary Korean society where we eat, shop and live.
In a way this sets up an easy trap for critics to bash the film as a fancy music video that glorifies urban consumerism ― and many Korean critics actually did so. But strangely the method of telling the characters’ social class through the way they dress or shop is reflective of our reality and therefore meaningful. A special tribute goes to Yu-na (played by Eom Jeong-hwa), an ambitious fashion consultant who dresses up in designer clothes and uses as much English as possible in her daily conversation as a way of covering her humble background.
To be sure, sleazy commercial values were there, like exaggerating the nudity of Han Chae-young, who is a sex symbol in Korea. Nevertheless, some of the film’s most interesting moments come elsewhere.
There are clever scenes, like when the couples find out about each other’s affairs at a wedding reception taking place on a ferry.
Suddenly the power goes out and the two women accidentally fall off a platform. In the next scene, their husbands dive into the water. When they rise above the surface, they are in the arms of different women.
Due to its long title, the film has been simply abbreviated as “love now.”
That may be the point. In many ways, “Changing Partners” is an urban fantasy and it presents questions regarding the mystery of love we may never be able to fully and honestly answer ― that is, are we true to ourselves? Why do we marry? Does love grow or die ― or both?

The supplements come with commentary from the director, a music video, descriptions of the film’s art direction and postcards.