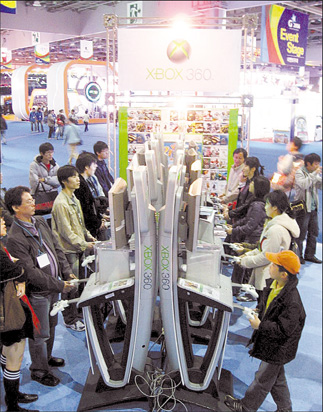 Gamers test out Xbox 360 games at the Microsoft booth during Gstar held at Kintex, in Ilsan, Gyeonggi. Provided by Microsoft

Online game developers introduced a range of exciting new games last week at Gstar, Korea’s largest game exhibition, but video and console developers stayed away.
Even though Gstar, which is supported by the Ministry of Culture and Tourism and the Ministry of Information and Communication, is now in its third year, only a few video game developers participated in this event.
Gstar offers game developers and buyers the chance to interact, and consumers see a glimpse of the future game market in Korea.
“We’ve tried hard to encourage console game companies such as Sony, Nintendo and EA to participate at Gstar,” said Chung Mun-kyeong, secretary general of Gstar.
“The console game market in Korea is still immature, so these companies are not inclined to participate,” Chung added.
Nintendo stayed away because the release of its new line-up didn’t match with the Gstar schedule, Chung explained.
Kang Hee-won, director of marketing at Sony, said Sony didn’t take part this year. It felt the 200 million won needed to rent the booths and set up for the Gstar exhibition was not cost-effective.
Kang added that for local online companies like Nexon, which rakes in huge profits, Gstar may be affordable, but for Sony, which has a small market here, a booth at Gstar is of little benefit.
However, Kang said Sony’s PS3 has a strong online system as its basic function, and the the console market in Korea is likely to grow.
This year major Korean game manufacturers such as NCsoft, NHN and Nexon participated, but other developers such as Neowiz, CJ Internet, Webzen and Graviti were absent.
Altogether, 150 companies took part at Gstar, which was held at Kintex in Ilsan, Gyeonggi. There were 68 foreign companies from 17 countries.
Microsoft was promoting its Xbox 360 games and introduced games including “Viva Pinata: Party Animals,” “Bioshock” and the much anticipated “Lost Odyssey” by Hironobu Sakaguchi, which is due for release at the end of this year.
“Halo 3” and “Project Gotham Racing 4” competitions were held at Microsoft’s booth.
There were 18 arcade companies present, such as IR Robot, D-Gate and Komuse, and three mobile game developers.
At the online game booth, Nexon introduced 11 new games, seven of which have never been mentioned publically. One of the new games is “SP1,” or SilentPlot 1, a massive multi-user online game set in a fictional Europe right after WWII.
Another is “Combat Arms,” a first person shooting game, and “CrazyShootingBubbleFighter,” a third person shooting game with cute characters rather than the standard military personnel.
Nexon has expanded beyond online gaming, which the company was built on, to adopt console games. The company displayed its Xbox 360 version of “Mabinogi,” a role-playing game previously serviced online.