The goddesses of the kitchen

The goddesses of the kitchen 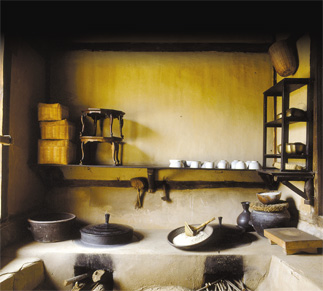 A traditional Korean kitchen was more than just a room for preparing food. Kitchens stood as complex metaphors for the role women were expected to play in society and the restrictions that bound them living in a male-dominated Confucian society.
Common proverbs like “Dump a woman who likes to leave the house,” and “Kitchen utensils get broken when you let others use them” give a fair indication of society’s views: Women should stay home in the kitchen and no one ― meaning men ― should help them with the cooking.
This negative view is evident in the language used to describe kitchens. Suffixes like degi or soi were traditionally used to refer to slaves, but they were also attached to the word for kitchen in Korean to refer to a housewife.
In the past, a woman would virtually live in the kitchen after she married and left her own family to live with her husband’s. A kitchen was where women bathed, ate, washed dishes, cooked, rested and kept warm by the stove that heated the whole house during the bitter winter months.
Kitchens were even places of worship, where shamanistic rituals for jowangsin, or the gods of kitchen, were held.
The organizers of the current exhibit “Rice” at the Museum of Women’s Life in Yeoju, Gyeonggi, have recreated a traditional Korean kitchen complete with plates, cooking utensils and a traditional stove. Visitors can catch a glimpse of the lives women used to lead.
Park Tae-byeong, the museum’s deputy director, said traditional Korean kitchens were designed specifically to enable women to work as efficiently as possible. “Kitchens were made in such a way that women would be able to sit down and carry out their chores,” Park said.
When kitchens were built, the floor was made deliberately bumpy to prevent women from slipping. This gave rise to the belief that the bumpier the floor, the more food would come into the house, Park added. 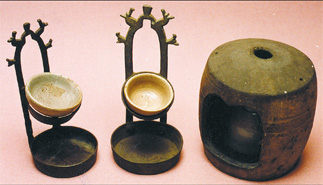 Unlike today, the kitchen was housed in a building separate from the rest of the home. This was for safety and hygiene reasons. If there was a fire, the whole house could go up in flames, and a separate kitchen kept cooking smells and wood smoke out of the other rooms.
It’s interesting to note that windows were placed high up on the walls, near the ceiling. This wasn’t a ploy to prevent women from looking out and yearning for fresh air. High windows with vertical wooden bars created better ventilation and kept the kitchen dry.
Inside the kitchen, you’d find rice chests, cabinets for storing utensils and low dining tables around which the family gathered to eat meals.
But there would be no oven, unlike in kitchens today. Boiling, braising and grilling rather than baking and roasting were the most common cooking methods in those days. And there would be no deep-fat fryer, either. Unlike in Japanese or Chinese cuisines, frying is not so common in traditional Korean cooking.
Of course, the biggest difference between kitchens of yesterday and those of today was the wood fire. Cooking took place around the buttumak, a kitchen fireplace.
Hung over the fire would be a large iron pot called a sot which was was used to boil rice, steam potatoes and make soup. The pot was regarded as a quintessential symbol of family life. A common expression to describe a married couple is “people who share one pot.”
As quaint as a traditional fireplace and cooking methods might sound to our modern-day ears, these kitchens were labor-intensive. From milling rice to feeding the fire and carrying water from the well to moving tables from the kitchen into the other rooms during meal times, as well as preparing all the dishes, a woman’s work was never done.
The rules for building a kitchen were meticulous. Hong Man-seon (1642-1715) outlined extensive instructions in the classic text “Sanlim Kyongje (Forest Economics).”
“Always use new bricks,” Hong wrote, “and wash them thoroughly. Always dig an extra layer of soil in the ground where the kitchen will be built and fill it with clean soil. The house will prosper if you add a dose of perfume and fresh water from the well.”
Other rules ban people from swearing, crying or even reciting a poem when facing the kitchen.
Another common rule is that the kitchen should face west. This theory is connected to the concept of yin and yang, where yin is the west ― the female energy ― and yang is the east ― the male energy.
In houses owned by the upper class during the Joseon Dynasty, men slept in rooms on the eastern side of the house, and women slept in the west wing.
This concept has filtered down to today. If you’ve ever joined a tug-of-war in Korea you’ll know that men take the eastern side and women take the west.
Considering the significance of the kitchen to family life, it’s no surprise that many legends about kitchens came into being. The Munhwa Yoo clan from Gurye in South Jeolla believe that when the clan’s original family house was under construction, the workers discovered a turtle. The family decided that the kitchen should be built exactly where the turtle was found, since turtles were propitious symbols.

Traditional kitchen utensils. From top to bottom: a tea kettle, ladles, a bowl with lid and an iron pot with lid.

There were also beliefs that evil spirits could get into the kitchen and possibly spoil the food. So if the rice pot over the fire made a particular kind of noise during cooking, a woman had to visit her husband’s chamber and bow. Similarly, if a soup pot became noisy, a man would to have to bow to his wife until the sound stopped.
We can only hope, for the sake of the bowing man, that the noises were short-lived.
Beliefs about healing were also connected to the kitchen. Shamans used to fill gourds with food, bang them three times near a sick person’s head and then mime removing a diseased organ from the sick person’s body. The invisible organ was then placed on top of the gourd, and the shaman would cast a spell to initiate a speedy recovery.
In his 1997 book “Korean Kitchens,” Kim Gwang-eon wrote that a traditional Korean kitchen was a uniquely female environment.
“It [the traditional Korean kitchen] was where women found comfort when they felt homesick for their parents and family after marriage,” he wrote. “It was also where women learned to read and write, where they would spend every day for the next 20 or 30 years.”
A family’s survival depended on the kitchen, and the women who ran them.