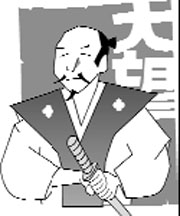 On New Year’s Eve, the Japanese think three symbols in dreams are lucky: Mount Fuji, an eagle and an eggplant. They are all deeply related with Ieyasu Tokugawa, who began the Edo Bakufu government, which lasted more than 300 years. At the end of his days, he stayed in Shizuoka, near Mount Fuji. He also enjoyed hunting eagles and eating eggplant. Many Japanese people like Tokugawa.
Sohachi Yamaoka’s novel “Ieyasu Tokugawa” was introduced to Korea in the 1980s and it soon became a major hit. This novel is focused on Nobunaga Oda, Hideyoshi Toyotomi and Tokugawa, Japan’s three heroes during its age of civil wars.
Oda pounds steamed rice into a rice cake, Toyotomi makes it into certain shapes and Ieyasu then eats it. This symbolizes the process in which Japan unified, as well as the characteristics of the three. If a cuckoo does not cry, “Kill it,” Oda says; “Make it cry,” Toyotomi says; and “Wait until it cries,” Tokugawa says. This anecdote is very well known.
However in Japan, Tokugawa’s reputation varies from a wise ruler, a good ruler or a dumb ruler.
The wise ruler theory comes from the fact that Tokugawa was able to endure hardship and had a high intelligence. By “neither killing nor saving,” he was highly praised for ruling the regional lords, where he did well in controlling the feudal lords. He was also very frugal. His first luxurious meal, of fried red snapper, became his last supper.
The theory that he was a good ruler is symbolized by his nickname, “raccoon.” He was a good strategist but at the same time deceptive and cunning. The famous history novelist Ryotaro Shiba said of him, “He was fond of intrigue, but was an uninteresting realist.”
The dumb ruler theory is based on the argument that the only reason he grasped supreme power is because of the fact that he ruled for 74 years. Unlike what is known about him, he was nothing but a man with a hot temper.
Without exception a hero has two sides: Critics and fans. It is up to each person to choose what to make of each hero.
The hot issue in the presidential race is which side Park Geun-hye, the former chairwoman of the Grand National Party, will take: Lee Hoi-chang or Lee Myung-bak? Park is said to be reading Yamaoka’s novel, Ieyasu Tokugawa, these days.
Park has been silent longer than expected. Maybe she agrees with Tokugawa’s technique of “neither killing nor saving.”