Breaking the silence about secret ‘comfort women’ past

Breaking the silence about secret ‘comfort women’ past 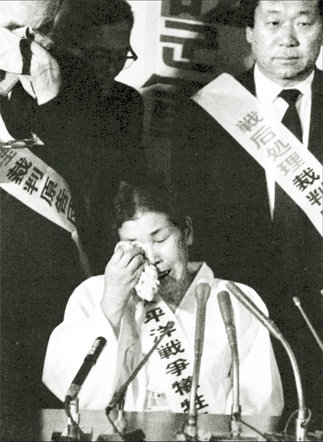 Kim Hak-sun reveals the truth about the “comfort women” forced to work for the Japanese military at a press conference in 1991. This photograph is featured at the exhibition. Provided by the Northeast Asia Foundation

Sometimes the past blocks out the present. Such is the case of the so-called “comfort women,” the sex slaves from Korea and other countries who were forced into prostitution by the Japanese army during World War II.
It’s been nearly 100 years since Japan formally colonized Korea, an occupation that ended in 1945 with Japan’s defeat and unconditional surrender.
But many deeply felt grievances remain. The sex slave issue is one of them, tarnishing existing relations between the two countries.
The comfort women are now old, and many who survived the horrors of their captivity have already died. This adds urgency to the efforts being made around the world, not just in Korea, to seek compensation for those who suffered such a traumatic fate at the hands of the Japanese.
The House of Representatives in the United States last July unanimously adopted a resolution calling for Japan to “formally acknowledge, apologize and accept historical responsibility in a clear and unequivocal manner” for the “coercion of young women into sexual slavery.”
This month, the European Parliament is hosting speaking tours of victims of sex slavery.
And just yesterday, the lower chamber of the Dutch Parliament unanimously passed a resolution urging Japan to apologize.
So far, though, Japan’s response has been inadequate. In fact, things are getting worse. Former Prime Minister Shinzo Abe made vague remarks last July that there had been no “coercion” on the part of the Japanese government or army.
This makes the new exhibition at Seodaemun Prison, central Seoul, all the more timely.
It’s been organized by the Northeast Asia Foundation in collaboration with the Ravensbruck Memorial Museum, the foundation’s counterpart in Germany, and seeks to spotlight the sex slave issue with even greater intensity over the coming weeks by narrating how the Nazis forced women into prostitution in concentration camps during World War II.
Kim Yong-deok, the foundation’s president, said the Ravensbruck Memorial Museum is publicly funded by the German government through the Brandenburg Memorial Foundation, both of which underline the degree to which Germany is facing up to its past.
“Both Japan and Germany infringed on women’s dignity during the war,” said Seo Hyun-ju, a researcher at the foundation specializing in modern history.
“What is different, though, are their postwar approaches to past wrongdoings.”
Researchers put together the exhibition by interviewing victims and witnesses and collecting photographs and other related items.
“The German government fully acknowledged the truth about what happened,” Seo said, citing government funds that have compensated the war victims.
Admittedly, Japan does have the Asia Women’s Fund, but it is not fully endorsed by the government, Seo said. And it’s also true that some of Japan’s former prime ministers have apologized for the sexual slavery. But comments made by some Japanese politicians have upset the international community, remarks that have only served to undermine efforts to come clean.
The issue of forced sex labor was regarded as a taboo in Germany until quite recently. The story is not a well-known part of Germany’s past, Seo said.
But the opening of the exhibition at the Ravensbruck Memorial Museum last January changed all that. It ran until September and was a huge success, Seo noted.
The museum is located north of Berlin and built on the site of the largest concentration camp for women and children during World War II. Despite its ban on prostitution, the Nazis ran brothels in the concentration camps where women were used as “production incentives” for men imprisoned in the camps.
The location for the exhibition is symbolic. The Seodaemun Prison was where the Japanese colonial government tortured and imprisoned Korean activists who were fighting for independence.
The Northeast Asia Foundation also features hundreds of photographs and exhibits about the Korean women forced to be sex slaves.
“I hope this exhibition encourages Japan to stop shutting out the truth about the forced sex slavery issue,” Kim said. “The truth cannot be kept hidden forever, and there should be proper compensation for the victims.”
The exhibition runs from Thursday to Nov. 30.