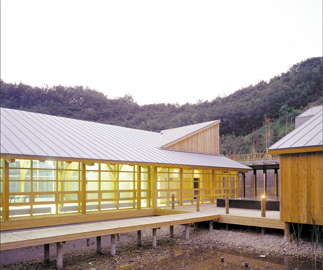 Korea is not noted for its architectural beauty. No matter how much we may love Seoul and the other major Korean cities, for all the traffic, noise and overcrowded problems they face, few of us are going to wax lyrical about the designs of the office buildings downtown or marvel at the row upon row of bland residential high-rises in the commuter belt.
One contributing factor, some experts say, is that it is difficult to find competent architects in Korea and that property developers are constantly looking for cheaper deals that keep architects from realizing their more creative blue-prints.
Yet, in the midst of the current negativity, an event is taking place next month and into the new year in Germany that will spotlight Korean design and designers on an unprecedented scale.
The Deutsches Architektur Museum, or DAM, in Frankfurt is planning a massive celebration of modern Korean design from Dec. 7 to Feb. 17.
It will be the biggest exhibition of Korean architects ever featured outside Korea.
Peter Schmal, director of DAM, said that he first became interested in Korean design during the 2005 Frankfurt Book Festival in Seoul. “When I visited Korea, I was surprised at the dynamic concepts that Korean architects came up with and thought that their talent was something to look out for,” he said. 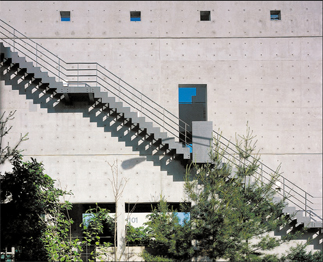 DAM is one of the few institutions worldwide specializing in architecture and preserving architectural heritage.
The title of this year’s exhibition is “Mega City Network 2007.” Sixteen Korean architects and one photographer will be involved. The event is being organized by the New Architecture Organization, headed by Lee Pil-hoon, and it’s sponsored by the Seoul city government and the Ministry of Culture and Tourism.
Kim Seung-hong, a professor of architecture at the University of Seoul and head director of Mega City Network, emphasizes that this festival is different from any other exhibition held abroad. He said that instead of featuring individual architectural styles, this exhibition will span a larger number of current Korean architectural designs and trends.
“We’re trying to show the range of contemporary Korean urban design,” Kim said, adding that the German publisher Jovis will publish a book about the exhibition and the designers. It will be translated into English and German.
“I was really disappointed when I visited university libraries in the United States and saw that there were no books on Korean architecture but only ones on Japanese and Chinese architecture,” he said.
Three main criteria were used to choose the designs to be featured at the festival. One was that designers had to incorporate elements suitable for a metropolitan city with a teeming population.
The second was that there should be traces of tectonics, or new ways of constructing buildings. This meant designs using new materials, or old materials in new ways, had the advantage.
The last criterion was that the building had to be “public-friendly” and sensitive to its environment.
“We picked designs that show the creativity and diversity of modern Korean cities,” said Kim Bong-ryul, one of the judges participating in the selection and a professor of architecture at the Korea National University of Arts.
“We have included up-and-coming designers, seasoned professionals who have been in charge of large-scale city projects and architects who have been involved in small, workshop-based projects,” he said. 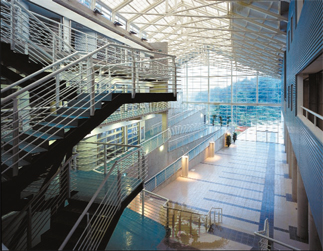 “Korea is at the forefront of this field in terms of speed,” said Yoo Ker, the head of I Arch Architects Co., a participant at the festival. “Korean architects are also working in one of the most demanding and ever-changing cities in the world.”
He added, “Through this festival in Germany, we intend to show how the fast pace of this society has influenced Korean architects in their work.”
The Korean designs, however, have not been created in isolation. Cho Nam-ho, head of Soltos Architects and Engineers and in charge of the training institute for the Kyowon Group, said, “Our training institute incorporates traditional Korean architecture with Western-style woodcraft and wood designs.”
The training institute won the prestigious gold medal in 2002 from the Asia Architects’ Association.
Remodeling, an area of particular interest for urban settings, will be one of the highlights at the exhibition. Gwon Moon-seung, head of Atelier 17, a participant at the festival and chief of remodeling Heonam Temple and Dukwon Gallery in Seoul, said remodeling in Europe is very different from Korea.
“We’ve developed some innovative modeling techniques in Korea that we can use to develop cities without erasing our historical heritage, and we want to share our work with the Europeans,” he said.
He said European remodeling relies mostly on retaining the shape of the original design, but in Korea the focus is on adapting the original design to fit the contemporary surroundings.
Under the title “Reflect,” Kim In-chul, from Chung-Ang University’s architecture department, will be displaying private housing and small office designs. He said that “reflect” symbolizes the way the designs mirror aspects of the surroundings and the inhabitants.
“We want our designs to resonate with elements of Korean culture and society, but we also want them to retain a unique voice,” Kim said.
The idea is to show off more than just aesthetics. “This exhibition should highlight not only the architecture, but also Seoul as a city. So designs reflecting the everyday lives of Seoul residents seem like an effective way to go.”
Lee Jong-ho, an architecture professor at Korea National University of Arts, will be exhibiting his designs for the Gwangju Biennale Art Gallery and the Park Soo Keun Gallery. “I want to show how Korean society is trying to retrace its history,” he said.
Jeong Gi-young, a professor of architecture and department chairman at Sungkyungwan University said, “I wanted to design something that interprets what society wants but through the eyes of a designer,” he said. Jeong designed the “miracle library,” a notable children’s library in Suncheon. 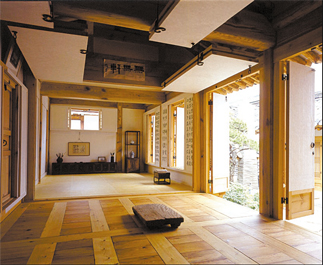 Moomoohun, a hanok, or a traditional Korean residence, by Hwang Doo-jin

“The exhibition ultimately takes a very urban approach,” said Hwang Do-jin, head coordinator for the exhibition. The main aim was for all the architects to create a small world which connects to the outside world in a fresh, modern way.”
Frankfurt serves as a significant backdrop to this exhibition, literally.
The work of the 16 Korean architects will be projected onto a screen that will be situated next to windows in DAM overlooking the German city, offering viewers a contrasting blend of Korean and German architectural elements.
At a time when cultural activity lies at the center of global competition, this exhibition is expected to test the possibility of Korean designs making an impact on the world market.