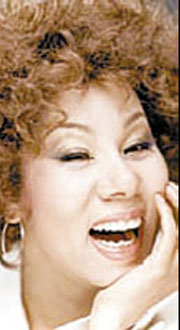 
Pop singer In Soon-e, contemporary poet Kim Nam-jo and 12-year-old actor Park Ji-bin are releasing a digital album to commemorate the 20th World AIDS Day, which falls on Dec. 1.
The project is supported by the Korea Federation for HIV/AIDS Prevention, a group that helps prevent AIDS and eradicate misunderstanding and biases about the disease.
All proceeds from the album will be donated to organizations that work in this field.
Kim Wu-joo, a professor of medical science at Korea University, will speak about the current status of AIDS in Korea at the launch of the album, which will take place today at 5:50 p.m. at the Lotte Hotel in central Seoul.
In, 50, has an African-American father and a Korean mother. Since her debut in 1978, she has experienced a great of racial discrimination, making her aware of the problems minority groups can face in Korea.
In fact, the AIDS album is the capstone of In’s career in charity work, which she began in 2003. She first volunteered at the Gangdong Sacred Heart Hospital charity festival.
Still in her prime as a pop artist, In has participated in many charity concerts to help children with AIDS. She hosted a charity fashion show last year to benefit low-income families.
By Lee Eun-joo