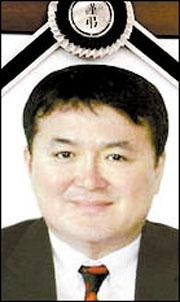 
The funeral for Kim Hyung-gon, one of Korea’s most influential comedians, took place Monday at Gangnam St. Mary’s Hospital in southern Seoul.
Kim died suddenly of a heart attack last year. He was 49.
The funeral was delayed because Kim donated his body to medical research. Doctors recently declared that Kim’s body was ready for cremation. His ashes will be placed in Chungah Park, a charnel house in Ilsan, Gyeonggi.
Kim’s family and other comedians, including Lee Yong-shik, Moon Young-mee and Ji Young-ok, attended the ceremony.
After the ceremony, the family headed to Le Meilleur Theater in Daehangno, central Seoul, a hub for the theater arts in Korea, as a gesture to Kim’s career in showbusiness.
Kim made his debut in 1980 after winning second prize in the TBC Gag Contest.
He appeared mainly with Choi Yang-rak, Im Ha-ryong and Shim Hyong-rae, the comedian-turned-director of the rencent box-office hit “D-War.”
By Lee Eun-joo