The dark side of the script

The dark side of the script 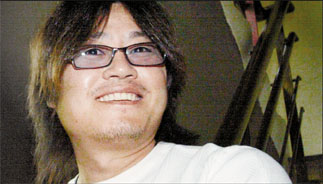 Director Won Shin-yeon, 38, is back with the thriller “Seven Days.” The story is about coldhearted female lawyer and mother Ji-yeon (played by “Lost” star Kim Yun-jin) who is trying to get a murderer on death row acquited within seven days in order to rescue her abducted daughter.
Won took over the project after another writer-director backed out. He immediately saw the potential of the script and got the movie into production. But filming proved to be a challenge.
“I was short on production costs,” Won said. “We had to take a lot of shortcuts.”
A stuntman and martial arts director for almost 10 years, Won used more artistic means to compensate for the lack of expensive action sequences that the film demanded.
This meant finding different ways to encapsulate the action. In the original scripts, one chase scene required 100 cars in 12 lanes of traffic. That wasn’t feasible, so the camera units just shot live street scenes and used that footage instead.
“There are no strict rules in filmmaking. I do what fits best,” he said, which is not surprising. Won is a self-taught director who has not received any formal film education.
He started out in films in 2005 with the horror flick “Scary Hair,” but his involvement in filmmaking goes back to 2002 when he received the top prize at the Korea Film Awards for producing “Bread and Milk.”
He later won the screenplay prize for writing “A Bloody Aria” (2006).
Seven Days, which opens today, is Won’s third full-length feature. This movie was also shot using Won’s philosophy of filming: no set rules.
Won used around 3,800 shots to heighten the tension, the highest number in Korean movie history. In comparison, “The War of Flower” (2006) had 2,300, and the Hollywood-made “Bourne Ultimatum” used around 600 for the car chase sequences.
Two to three cameras were running simultaneously to capture enough action for the editor to create the level of drama and action that the director required.
“It’s best to write and shoot as many scenes as possible,” Won said. His own stance and belief in the filmmaking process helps him compensate for his lack of formal training in the business.
Kim Yu-jin gave him her full support during the shoot, accepting a role in the film without hesitation.
Won e-mailed Kim the script, and in no time at all she flew back to Korea from Hawaii.
Casting Kim was the best choice, Won said. 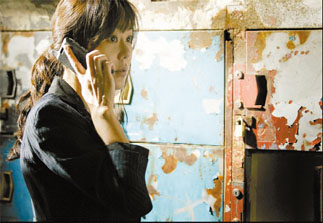 “The role is tough. She has to play the mother of an abducted child who is trying to achieve the impossible [acquit the killer],” Won said. “But she was so absorbed in her character that she continued to cry even after we’d finished shooting an emotionally charged scene.”
Her skill as an actress tap into a deep reserve of emotion, Won said.
Part of the intrigue for Kim was the twist in the tale at the end of the film, although Won says the twist shouldn’t be seen as the main purpose of the film.
“It’s pretty obvious who the abductor is, but having the twist keeps the audience hooked,” he said. The tension lasts until the last court scene.
“The case is actually based on a real-life story. I wanted the movie to be as realistic as possible,” Won said.
The director was also keen to portray what he believes to be Korea’s lax legal system.
Having released a thriller, some fans want Won to make an action film next, showcasing his skills as a former stuntman and martial artist. But Won hesitates.
He feels that he doesn’t yet know enough about what makes people tick and how society works. Right now, he is still learning about people, their emotions and their stories.
“I want to depict the darker and more isolated aspects of society,” he said.