The return of the King of TV drama

The return of the King of TV drama 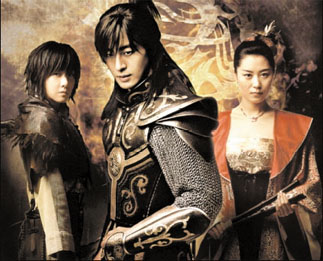 Koreans often say it’s better to have too much of something than not enough. That seems to be true when it comes to the Korean actor Bae Yong-joon. From the early stages of his career, Bae has enjoyed a wave of popularity that has turned him into a living legend.
If Bae’s name doesn’t ring a bell, you’re either very new to Korean soil or you make it a rule to skip the entertainment sections in newspapers and magazines.
You might know Bae as Yon-sama, the name given to him by his devoted Japanese fans. Sama is used in Japanese to bestow the utmost level of respect.
Bae’s star turn in the TV drama, “Winter Sonata,” a phenomenal hit in Japan in 2002, made him a virtual living god to Japanese fans, many of whom were middle-aged housewives.
To be honest, I really don’t like the actor or the trite Winter Sonata and its anodyne love story so typical of many Korean TV dramas. But I know my trifling viewpoint will do nothing to diminish Bae’s Asian fandom.
But Bae must harbor some concerns about his fans’ excessively high expectations. He often appears in films and TV commercials, but he has long delayed his return to TV dramas.
Last September, however, he made a stately return with the MBC-TV’s ambitious “Taewang Sasingi (The Tale of the Great King and the Four Gods.)”
Playing the Great King seems a fitting return, giving Bae the chance to break free from his image as the tender lover in Winter Sonata.
The budget is a whopping 43 billion won ($46 million), and the show drips money: glamorous costumes, lavish sets and spectacular war scenes.
The story is based on a mix of legend and historical fact. It tells the story of the Great King Gwanggaeto of the Goguryeo Kingdom (37 B.C. to 668 A.D.)
The story is very relevant today, striking a chord with Korean audiences mindful of history. Manchuria, the setting for the tale, is the subject of an intense territorial dispute between China and Korea.
I’ve been procrastinating about writing about the Great King since it was first broadcast, but my conscience allows no more delays. The drama is hugely popular, with an audience rating of about 30 percent. And I have to come clean. The reruns on Saturday afternoons are now part of my weekend routine, and I try to rush home on Wednesdays and Thursdays to catch the 10 p.m. showings.
Bae stars as the Great King, a respected sovereign who cares very much for his people. His rival is his friend-turned-foe Yeon Ho-gae (Yoon Tae-young), and he has a love-hate relationship with Seo Gi-ha (Moon So-ri), a messenger from the gods.
I take a mean pleasure at Bae’s face, now more wrinkled with dark circles around the eyes, but I have to admit this big-budget drama is very appealing.
Bae gives a strong performance as the Great King, but the success of the show is also due to the well-structured story line and excellent performances from the supporting cast, in particular Moon So-ri, whose biggest weapon is not just her looks but her acting ability.
What’s also interesting is how this period drama blends fantasy into the narrative, instead of getting bogged down in historical accuracy. Magic spells and legend fill in where historical facts are hazy, which is why the Great King offers great entertainment rather than a dull history lesson.
Bae, though, is the star and the reason many tune in. His return to the small screen has been a triumph and frees him of the shackles of the “living legend” tag.
I still don’t like the girlish bangs that Bae sports in the show, but what can I say? His Japanese fans adore him.