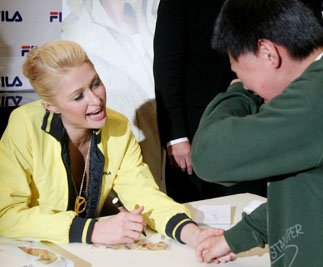 A media frenzy and a weeping teenage boy greet Hilton at a signing event in Seoul. [YONHAP, NEWSIS]

For a good hour, Paris Hilton was a no-show at her press conference last Saturday afternoon.
The conference was supposed to start at 2 p.m. but there was no sign of the 26-year-old hotel heiress, who was making her first visit to Korea.
Dozens of reporters were increasingly irritated with the excuses and promises offered by Hilton’s PR team.
“Is she crawling down the stairs or what?” yelled one reporter, followed by nods of approval from the rest of the gathered press people.
Pushed to the limit, some reporters began to complain, “This is so Paris Hilton,” and “She is so not worth our time and coverage.”
The heiress made a belated entrance at 3:07 p.m., and had to watch most reporters stand up and walk out in protest.
But press photographers know a good shot when they see one, and at first sight of the controversial celebrity, the room erupted into a frenzied trigger-happy photo shoot.
The photographers had no choice. They knew that Hilton was hot news for Korean readers and TV viewers.
Since so many reporters had boycotted the conference, Hilton was not exactly bombarded with questions. Instead, by the end of the allotted time, her publicity officials were asking her questions.
The last to leave were the photographers, inviting Hilton to dress in a hanbok, the Korean traditional dress.
Harangued for arriving late, Hilton fiddled with her blond locks. “I had a tight schedule,” she murmured.
True, Hilton did have a full program during her five-day visit that ended Sunday. At one event on Friday where she met with fans, a 14-year-old boy burst into tears.
“I am a huge fan of Paris Hilton, and so is my sister,” the overemotional boy was quoted as saying in the Korean press.
Paris Hilton Fatigue, a condition spreading through many parts of the world, especially after she did jail time following a drunk-driving conviction, has not yet reached Korean shores.
“It was amazing for us as well,” said Kim Eun-young, Hilton’s publicity manager during the trip, who stayed glued to the socialite throughout her trip.
“There were so many people from the media and so many fans. Ms. Hilton was equally surprised.”
Kim did her best to break down Hilton’s bad-girl image, citing the time Hilton stopped one of her aides from throwing out leftover pizza. Apparently, Hilton is more frugal than the media would have us believe, Kim said.
Kim also said Hilton had asked her driver to make an unexpected visit to a downtown pet shop where she was given an ivory-colored Pomeranian. Hilton immediately named her new puppy Marilyn Monroe, but later changed it to Kimchi because the dog was a “Korean girl,” Kim said. 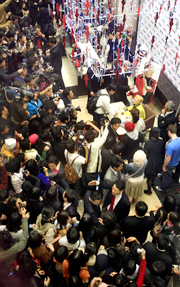 But, in all honesty, why on earth does the Korean public go ga-ga over Hilton?
Kan Ho-sup, a fashion professor at Hongik University, blames the media. “The global media delivers news about Hollywood celebrities to Korean homes in real time and that is giving rise to this obsession with fame and fortune,” Kan said.
Cable TV and other media outlets pour forth a deluge of up-to-the-minute gossip and pictures about Hollywood celebrities, including Hilton, Kan explained.
“If you check out Internet shopping sites and Korean blogs, you can see how Koreans love to follow the lives of celebrities,” Kan said.
Another factor is access to news is so immediate that the physical distance between the fan and the celebrity breaks down, she added.
“It’s now all too common to see people aspiring for the ‘Hilton look,’” Kan said.
Park Jin-hee, a director at a fashion-related public relations company called In Trend, agreed. “In the past, Koreans liked Hong Kong stars like Leslie Cheung [Jang Guk-yeong in Korea],” Park said. “Now Koreans are more familiar with Hollywood celebrities, and they are not afraid to display their affection and reveal their aspirations.”
Contrary to what you might think, Hilton’s bad-girl image has boosted her popularity in Korea, Park said. “Hilton has this fairy tale princess image. She was born into the Hilton family and has money to burn. Koreans envy her for this and at the same time adore her,” she said.
“Whenever this little rogue girl does something wrong, she has the cash to settle any problem. Korean fans lap up this kind of story. It’s a kind of fantasy world for them,” Park said, adding that she is not a Hilton fan and detests the way the celebrity’s “over the top” style is selling so well in Korea.
Kim, Hilton’s publicity manager, said Hilton understands what makes her tick with fans. “Ms. Hilton knows her charms as a bad girl, and she is honest and straightforward about using them,” Kim said.
Last Saturday around midnight this adoration of the celebrity was obvious to see. Battling the cold and sore feet, dozens of people were huddled outside the clubs that cluster around Hongik University, hoping to catch a glimpse of Beyonce Knowles, the American pop star who gave her first concerts in Seoul last week.
Beyonce was supposed to show up at the club Blue Spirit at 11 p.m., but she arrived late, at around half past midnight. The spectators, though, many of whom said they didn’t even like her music that much, were very forgiving.
“I’m not a fan of Beyonce, but come on, she is a huge celebrity,” said Kang Hee-sun, 28, an office worker. “I just wanted to catch a glimpse of her with my own two eyes.”
By the time Beyonce’s black sedan came to pick her up, the streets were jam-packed with onlookers. Some were kitchen staff from nearby restaurants and wine bars .
“Of course I’ve heard of Beyonce,” said Ms. Lee, a middle-aged cook who declined to give her full name. “She is so pretty and famous. I just wanted to see her.” Lee was still clutching the plate she was drying when she got word Beyonce was close-by.
So Hilton, Kimchi the puppy and Beyonce flew home Sunday, to the sadness of many and the relief of others.
But they left in their wake an even more fervent craze for the lives of celebrities, one that won’t diminish any time soon.