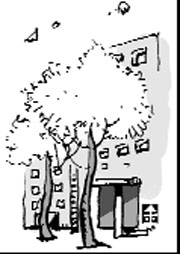 Many of the masterpieces created by Kim Soo-keun, the pioneer of Korean modern architecture, are picturesque red brick buildings. During a tribute held last year, architects influenced by Kim talked about the course he has followed, reciting some of his famous words, such as, “Architecture is a poem made of light and bricks.”
The Dongsung-dong Project, an attempt to build a cultural district at a spot once occupied by Seoul National University, was launched with great expectations in 1975. That area is now called Daehangno.
The people who were once fascinated by Daehangno because of its red bricks now seem disappointed. The atmosphere of Daehangno is very desolate these days, casting a shadow over its nickname, “Asia’s Broadway.” The side streets are dominated by concrete commercial buildings filled with pubs and restaurants. The small sign marking the last tea house, “Hakrim,” looks deplorable.
Even though there are more than 100 theaters in Daehangno, patrons line up for good dramas at only three of them.
A small comedy theater showing “Gag Concert” and Theater Hakchon, which runs Korea’s longest-running musical “Line 1,” are among them. Many people say, with some grief, that they consider the existence of the musical “Line 1” admirable and somewhat satisfying, because its standing seats have always been occupied for the past 12 years.
Hyehwa-dong, which has a few small theaters adjacent to the Daehangno, is dubbed “off-Daehangno,” imitating “off-Broadway.” However, whether it should be considered an expansion of Daehangno or just a place where people are trying to get away from surging rent prices is unclear.
Against this backdrop, the Seoul Metropolitan Government has recently taken the lead in driving forward with the Dongsung-dong Revival Project. Following the opening of the tentatively named Seoul Performing Arts Center next to Hyehwa Station, the blueprint calls for more concert and art buildings to be constructed with the formation of a designers’ street.
However, the authorities should pay more attention to the people’s criticism that Daehangno is deteriorating due to commercialism, even though it was designated as the second cultural district of Seoul in 2006. The late Kim insisted that bricks are the material needed for architecture to express usefulness and aesthetics. The balance between culture and commercialism seems to be broken in Daehangno. It makes the people miss Kim even more.