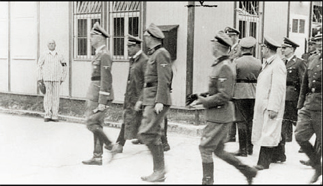 If history teaches us anything, it’s that the truth can take years to be revealed.
That’s certainly the case with the forced sexual slavery orchestrated by the Japanese and German militaries during World War II.
Unlike Japan, Germany has made an effort to face up to its use of forced sexual labor. The publicly-funded Ravensbruck Memorial Museum in Germany held an exhibition this year on how the Nazis forced women to work as prostitutes in its concentration camps.
That exhibition has now come to Seoul and opens today. In collaboration with the German museum, Korea’s Northeast Asia Foundation is displaying some 300 photographs and artifacts, including many from its own database, that tell the truth about the so-called “comfort women.”
Before the exhibition opened in Germany, few people knew that the Nazis had forced women to be sex slaves in their concentration camps. The issue was taboo. But Austrian college students broke the silence two years ago with a small exhibition.
The Ravensbruck museum heard about it and soon lent its support, expanding the size and depth of the project.
The Seoul-based Northeast Asia Foundation, which has made forced sexual slavery a major issue, was impressed by the courage displayed by the Germans to uncover the truth, in stark constrast to Japan’s attitude on issues involving comfort women from Korea and other nations.
Japan has faced stern criticism from the international community for its failure to fully acknowledge its past.
The foundation decided to collaborate with the German museum and host the exhibition here. The aim is to further press Japan to break its own silence.
The exhibition opens today at the Seodaemun Prison in central Seoul and runs until Nov. 30.
Insa Eschebach, the director of the Ravensbruck museum, will give a talk about the use of sex slaves in Nazi Germany during World War II. The talk takes place at the opening ceremony at 11 a.m. at the exhibition venue.
It was Heinrich Himmler, head of the SS, a powerful military organization in Nazi Germany, who dreamt up the idea of forced prostitution. Women were used as “production incentives” for some male prisoners ― not Jews, who were excluded ― working in the camps. Part of the rationale was to prevent homosexuality, said Seo Hyun-ju, a foundation member and scholar.
The exhibition will be presented in English and Korean.