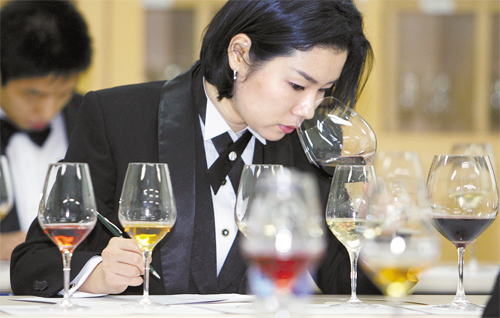 A sommelier must identify wines by their bouquet, as in a competition held last year. [JoongAng Ilbo]

Drinking wine is a relatively new experience for Koreans, and wine drinkers here often need professional help.
Across the country it’s common to see drinkers ― mainly men ― chucking back large quantities of alcohol, very quickly, in large smoky groups at cigarette-strewn tables overflowing with food.
Wine, though, is different. A whole new world. Before purchasing wine in a restaurant or a wine shop, or when buying wine as a gift for friends, or when you’re having guests over for dinner, you have to ask yourself some tough questions. Red, white or rose? Which vintage? What’s the bouquet like? French or Chilean? Should I have a merlot with my fish? Has this bottle corked?
With so much uncertainty, you might need professional advice, and in Korea, where wine consumption is on the increase, there is a greater demand for sommeliers.
“A sommelier is wine steward,” says Julia Hong, 36, a sommelier at the Shilla Hotel Park View. “We recommend wines for specific dishes, explaining what goes well with what. We also manage the wines by doing the purchasing and stock selection.”
In 2004, Hong became one of two Koreans, and the first Korean woman, to receive the Mention Complementaire Sommellerie, official sommelier certification from the French government.
“Many people think sommeliers are the people who taste the wine, but actually we work in the service industry. Testing is just part of our job,” Hong says.
Until recently, the term “sommelier” was unfamiliar to most Koreans. Today, however, with wine bars popping up in many neighborhoods across Seoul and wine consumption on the rise, the name crops up more often.
Not only that, it’s a profession that is becoming increasingly more attractive to women. Kim Kyung-hee of Vin-ga, a wine bar in Gangnam, southern Seoul, was the third Korean, and the second woman in Korea, to receive French certification, and Eum Gyeong-ja at Table 34, a bar in the Intercontinental Hotel in Gangnam, is another well-known female sommelier in town.
Ko Jae-youn, a professor at Kyung Hee University’s College of Hotel and Tourism and also a member of the Korea International Sommelier Association, says there are 180 internationally and locally certified Korean sommeliers, 50 percent of whom are women.
The local sommelier certificate is handed out by the Sommelier Association of Korea, and the the international certificate is conferred by the International Association of Sommeliers.
Ko said 60 percent of his students aiming to qualify as sommeliers are women. Most are in their late 20s to late 30s.
“Men used to dominate the sommelier profession in Korea, but that’s changing,” Ko says.
Many of his female students majored in French in college. “It’s hard to get a job by just speaking French. So, making use of their language skills, many women travel to France where they train to become sommeliers,” Ko says.
But there’s a host of other reasons explaining why women want this job, according to Ko. Women tend to prefer wine to other drinks like soju, the Korean spirit of choice; the pay is decent, once you get established; and men, who usually make up the bulk of the customer base in wine bars, prefer female sommeliers, believing women are more sensitive to the demands of the job.
Kang Pil-jung, a manager at the wine company Winenara in Gangnam, southern Seoul, agrees. He says women have the aptitude to thrive in the industry, adding that women also appreciate the lower levels of sex discrimination in the service industry, compared to that found in other professions in Korea.
“That said, there are still a lot of men in the Korean sommelier industry,” he adds.
The need for sommeliers, male or female, is not likely to disappear anytime soon.
Recent figures released by the Korea Agro-Fisheries Trade Corporation show that Korea imported $176.5 million worth of wine in the first nine months of the year. That’s a 43 percent increase by import size and a 67 percent escalation in value since last year.
French wine makes up $40.8 million of that total, followed by Chile at $18.9 million and Italy, $13.5 million. Even Chinese wine, a newcomer on the wine scene, saw a 378 percent increase in Korea until September.
At the same time, Korea exported $138.7 million worth of its own alcohol, a 3.1 percent drop so far this year, resulting in a $362 million deficit in booze sales.
And if you need any more proof that interest in wine is growing, check out the number of wine bars springing up around town, not just in high-end neighborhoods like Cheongdam-dong, southern Seoul, but also in the back streets of Hongdae, a hot spot more used to soju-quaffing young artists.
Riding the wine wave, Winenara runs a private academy in Gangnam for training sommeliers. The company announced just last week that it is holding Korea’s first-ever competition exclusively for women sommeliers on Nov. 27.
But Kang says to be a great sommelier, you don’t actually need certification. Expertise and knowledge are derived from experience, he says. People who have worked in wine bars for more than a decade know the industry and the product inside-out, otherwise their businesses would collapse. 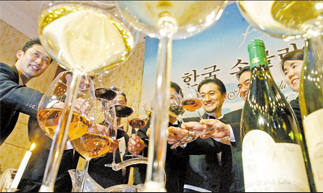 A group of sommeliers toast their success at a competition last year. [JoongAng Ilbo]

It’s fair to say, though, according to Ko, that despite the mushrooming of wine bars across Seoul, there aren’t that many certified sommeliers.
“Most wine bars are not officially certified,” Ko says.
Since there are so many uncertified sommeliers in town, Kang says it is hard to estimate the exact number of women sommeliers at work.
For anyone interested in taking up this profession, Hong of Shilla Park Hotel cautions that the job isn’t as easy as people think.
She starts her day after lunch and finishes late, usually around midnight. “When I worked at the Library bar at the Shilla Park, I didn’t get to bed until 2 or 3 in the morning,” Hong says.
“It’s hard to have an ordinary social life working in this profession.”
Her first tasks include stocking the bar, checking for damaged glasses, looking over the reservation list and studying the chef’s special menus.
But the real work starts when customers walk in, usually in the late afternoon. That’s when she has to be ready to recommend and inform. Some customers might know a thing or two about wine, so Hong has to know what she’s talking about. What are the latest trends? What do wine critics recommend?
So much of her spare time is spent reading around her subject.
Hong also has to stay in practice as a wine taster. “A lot of wine tasting is about memory,” Hong says. “If you’ve tasted a certain wine before, you can sometimes figure out what type of grape and what region and even what year the wine came from just by looking at the color and checking the bouquet and taste.”
Even on her days off, Hong visits wine bars and restaurants around town to see what’s new.
“The truth is that this job is very time-consuming and physically hard work,” Hong says. That’s something many would-be sommeliers fail to realize, she says.
Hong said she quit her job at Hanmi Bank in 1999 and trained to be a chef in Switzerland. She said she wanted a profession that would last a lifetime.
During her training, she met a sommelier who turned her life around. “I was overwhelmed by the professional way he handled business,” Hong says.
“He not only served customers, he recommended wine and dishes like he was talking to a friend.”
Interestingly, Hong said she doesn’t drink much alcohol, and when she tastes wine, she doesn’t swallow.
“Your senses become dull when you drink too much,” she says. She only swallows the wine when a regular customer asks her to taste a drink and when she’s checking the house wines.
“House wines are open and I have to check that they are in good condition,” Hong says, who is still single and not too desperate to tie the knot.
“If I marry, I hope my husband will be understanding about my job. I have no plans to quit because this job is for life.”