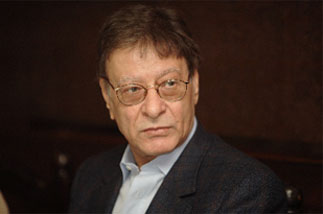 Few poets in the Arab world have captured the political consciousness of its people so poignantly as the Palestinian poet Mahmoud Darwish.
His poems are vivid expressions of loss and life in exile, depicting the restless fate of his homeland.
His career as a poet and political activist is similar to the path many poets here took during the Korean military dictatorship.
Darwish, 66, introduced his new volume of poetry, “Lover from Palestine” (Asia Publishing, 2007), at a recent press conference at Cecil Restaurant in central Seoul, a popular meeting place for Korean democracy activists, especially during the 1980s.
This is the first time his work has been translated into Korean, and Ko Un, popularly dubbed Korea’s national poet, attended the conference.
“For Palestinian poets, writing is about expressing the violence around you in a literary from,” Darwish says. “You can never escape the burden of political tension or aesthetic responsibility.”
His poems use plain language and a vivid sense of urgency to delve into the political turmoil of his homeland.
In “Identification Card,” a poem Darwish wrote when he was 18, he uses his Palestinian identity to confront the Israeli authorities: “Write down!/ I am an Arab/ And my identity card number is fifty thousand./ I have eight children./ And the ninth will come after a summer./ Will you be angry?”
Darwish says, “Personally I’m not too fond of this poem for two reasons. It received more praise than it deserved. I’m now heavily identified by it. I’m also not fond of the aesthetic quality of the work. It was written as a direct response to violence, and it doesn’t feel like a poem.”
Darwish’s poems serve as candid testimony to his life as a refugee.
He was 7 when the Israeli military invaded the village of Al Barweh in Galilee where he lived. Jewish settlers moved in and Darwish and his family were moved to a refugee camp in Lebanon, then to Haifa and, in 1970, Moscow, where he studied political economy.
In 1971, he settled in Beirut where he worked as a poet and journalist. A year later, after repeated arrests and imprisonment for publishing controversial books of poetry, Darwish announced during a press conference in Cairo that he would work on Palestinian issues from outside of his homeland.
In response, the Arab media treated the poet as a deserter. People said he had betrayed his duty to Islam as a freedom fighter.
Despite these accusations, the sense of longing for his homeland distilled within his poetry is palpable.
In “A Soldier Dreaming of White Lilies,” the poet writes about a Jewish friend who decides to leave the country after returning from war. The poem read: “He told me that home is drinking his mother’s coffee and coming back safely at evening ... He lit a cigarette and said as though mincing between pools of blood: I was dreaming of white lilies of an olive branch of a bird ... I want a good heart, not the weight of a gun’s magazine. I want a day and its sunlight and no fascist victory exultation in it.”
Arab critics have been critical of Darwish’s split career as a poet and political activist. Borrowing a biblical excerpt about Jesus and his disciples, the critics described of Darwish’s work, “If poetry, then poetry; if politics, then politics.”
However, Darwish remains an immensely popular poet in the Arab world. His poetry is often put to music in popular songs.
“A poet does not know much about his poem,” says Darwish, now based in Ramallah, a central West Bank Palestinian town. “[Poets] often forget about the logic between words of their poems. By the time they write a new poem, they forget about their past. It’s a healthy lapse of memory, because it saves them from self-duplication.”
Politically, however, he hasn’t lost his edginess.
“The reality of Palestinians is one of the foremost tragedies of 20th century,” he says. “But still, if I were to think what I would have been if I weren’t a Palestinian poet, I don’t have an answer.”