How sport strengthened a nation

How sport strengthened a nation 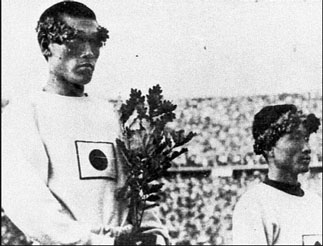 Son Gi-jeong, left, was forced to wear the Japanese uniform when he won the marathon gold medal at the 1936 Berlin Olympics.

What’s the biggest sports moment in Korean history?
The 1988 Olympics?
The 2002 World Cup?
You can make a solid case for either.
But there’s an earlier, lesser-known moment that rivals them, at least symbolically. And it explains the link in Korea between sport, religion and nationalism. And how sport evolved within the framework of Japanese invasion, oppression and control.
The moment is described in Gwang Ok’s book, “The Transformation of Modern Korean Sport: Imperialism, Nationalism, Globalization.”
The book reads like a dry academic text, but it is well researched and documented.
Gwang writes that for Koreans under Japanese occupation from 1910 to 1935, sport was a way of clinging to their independent spirit and national identity.
While the Olympics and World Cup were huge international productions, Ok examines a quieter event at the 1936 Berlin Olympics that many Koreans will never forget.
The 1936 Olympic marathon was won by Son Gi-jeong, a Korean who was forced to wear a Japanese uniform because of the occupation. One of the Korean domestic newspapers, the Dong-a Daily, published a photograph of Son at the medal ceremony, but the newspaper altered the image to distort the Japanese flag on Son’s uniform.
The book contains an illustration of the runner with the flag erased from his running vest.
“The impact of the report was incalcuable,” Gwang writes. “The identification of Son, in defiance of the Japanese propaganda, as a Korean gave the long-suffering Korean people great pride and restored much-needed national self-respect.”
The book contains a quotation by Son on his moment on the Olympic medal podium: “I felt desperate and ashamed when I stood on the victory stand, wearing a shirt with the Japanese rising sun on the left chest.”
It is said that the act of removing the flag so enraged the Japanese colonists that they imprisoned eight people connected to the newspaper and suspended its publication for nine months.
In his examination of origins of modern sport in Korea, Gwang covers the impact of the opening up of Japan in the 19th century and the role Christian missionary schools, foreign language schools and the YMCA played from 1880 onwards.
Gwang writes: “The evolution of sport in Korea was the outcome of a symbiotic relationship between religion, nationalism and sport and an obvious paradox, namely, that Western cultural imperialism was enthusiastically embraced by an Asian nation ― in order to offset Eastern political imperialism. In short, the adoption of modern sport in Korea was a tool with which to confront Eastern imperialism.”
Sport wasn’t embraced overnight, however, partly due to Confucian views of the body. 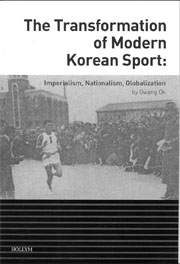 The Transformation of Modern Korean Sport

When King Gojong (1864-1873) first watched a tennis match, he is reported to have found the game “pitiable” and said next time the players should get servants to play for them.
And for women, sports was not ladylike, initially. It was for boys and young men. This is hardly surprising since girls and women had few opportunities even for education.
At Ewha Girls’ School, for example, Gwang writes that “physical education and sport provoked serious resistance at the beginning in 1890, but took place on a regular basis from 1892.”
Between 1876 and 1910, sport “meetings” in Korea were places where students, parents and staff could express political rage, sing, demonstrate national identity and assert their determination to save the nation.
Gwang includes a report from the Sept. 26, 1925 Dong-a Daily on the role of sports.
“The success or failure of the nation is not dependent on politics or economy, but it depends on sport. Sport can create strong national mentality and social stability. Sport for all is definitely useful for our society, especially under the Japanese colonization.”
In addition to 15 tables, 69 footnotes and an 18-page bibliography, the book has some historical photographs in its 11-page appendix, including conscripted Korean youths in the Japanese Army in Seoul in the 1930s; military drills under Japan; a men’s weight race; Korean archery, wrestling and swinging; the first Korean women’s tennis match in Seoul in 1923; the introduction of hockey in 1910; the Sariwon baseball champions in the 1920s; a basketball league at the Seoul YMCA in 1928 and wartime gymnastics posters.
Gwang is a full-time lecturer in the Department of Exercise Science at Chungbuk National University.