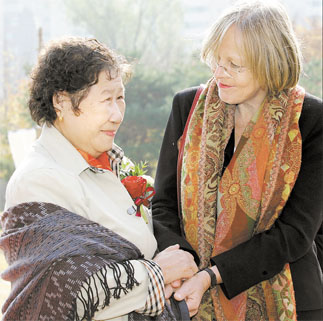 Kang Il-chul, left, a victim of Japanese sex slavery, holds hands with Insa Eschebach, right, director of the Ravensbruck Memorial Museum of Germany. Eschebach visited Korea this week for the opening of an exhibition on sexual slavery. The exhibition started Thursday and runs through Nov. 30. It is hosted by the Northeast Asian History Foundation.

The air smells different inside the Seodaemun Prison History Hall, a group of cells where the Japanese colonial government confined and tortured Korean independence activists.
More than six decades have passed, but the prison that is now a part of history still seems to hold the dismal air, making visitors feel solemn and respectful of those that fought against Japanese colonial rule from 1910 to 1945. This sense of gravity and the weight of history were not foreign to Insa Eschebach, director of the Ravensbruck Memorial Museum of Germany, who visited the prison history hall Thursday. Eschebach flew from her home in Germany for the opening of a new exhibition on sexual slavery during World War II. The exhibition is a collaboration between the Ravensbruck Memorial Museum and the Northeast Asia History Foundation.
“I was deeply impressed by the bleak atmosphere of the prison cells that add to the gravity of the exhibition,” Eschebach said.
For two years Eschebach has been the director of the museum, which is publicly funded by the German government. Located in Ravensbruck, north of Berlin, the museum stands on the site of a Nazi concentration camp. It was the biggest of its kind for women and children, as it held some 132,000 prisoners of more than 40 nationalities from 1939 to 1945. Eschebach said she joined the museum out of “a sense of historic responsibility.” She held the exhibition at her museum from January to September about the women prisoners of Ravensbruck who were forced to be prostitutes in 10 concentration camps by the elite Nazi guards, also known as the SS.
Compared to the so-called “comfort women” of Asia, less was known about the forced sexual labor of the women prisoners that the Nazi called “production incentives” for male prisoners producing arms. The Ravensbruck museum’s exhibition of photographs and related artifacts on the forced sexual labor drew attention to the matter and received media attention in Europe to a degree that surprised Eschebach.
The exhibition is scheduled to travel to other parts of Europe, such as Oslo, Norway. Currently, some of the exhibits are on display at the Seodaemun Prison History Hall in Seoul. The Northeast Asian History Foundation of Korea invited the German exhibition and presented it together with related artifacts of the Korean women who were forced into sexual slavery for Japan during the war. The exhibition started Thursday and runs through Nov. 30 at the Seodaemun Prison History Hall, central Seoul.
Eschebach’s long journey from Germany was rewarded when she met and held hands with an ex-“comfort woman” Kang Il-chul. Language barriers did not stand in the way for Eschebach, 52, and Kang, 81.
The two ladies later looked around the exhibition together with arms folded. “Words did not matter at all, as my heart could feel her years-long pain,” Eschebach said. Kang, who was forced to be a sex slave for the Japanese Imperial Army during the war, is now living in a shelter called House of Sharing with other victims. 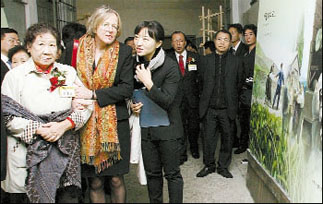 On Thursday, Kang had to stop her tour of the exhibition because the photographs, artifacts and the staged “comfort stations” were emotionally overwhelming. “I came back from the battlefield with my body and heart full of scars,” Kang said. “I am counting the years to my death, but I won’t be able to sleep in peace without seeing Japan make a heartfelt and proper apology.”
Eschebach has much to say about the post-war apology. “In order not to repeat unfortunate history, we have to reflect it clearly,” Eschebach stressed. The German government made acknowledgement and compensation for its wartime crimes, in striking contrast to Japan, which remains vague and faces continued criticism from the international community.
Eschebach did not state a clear answer to what she thinks of Japan’s ambiguous attitude, but she said, “One obvious thing is that the proper reflection of the past is the key to become a mature and truly democratic society.” Eschebach noted that Germany could properly acknowledge and apologize for its past because the post-war government declared a clean break from the past, which is not the case for Japan. “Germany has continued to look at the past and try to learn a lesson, and the exhibition was one good example,” she said. This willingness to address the past is a reason why the Ravensbruck Memorial Museum boasts more than 100,000 visitors year, she added. 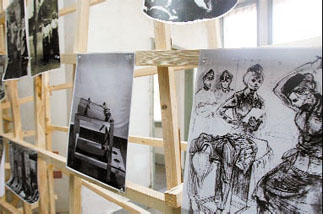 The exhibition hosted by the Northeast Asia History Foundation includes a group of photographs, related artifacts and drawings on sex slavery by Japan and Germany during World War II. By Kang Uk-hyun

The issue of sexual slavery, meanwhile, was more of a taboo, but Germany shed light on the issue in the 1990s, and Eschebach gave credit to the Korean victims of the comfort women atrocity. “Watching the Korean women courageously breaking the silence since the 1990s, Germans started to take interest in the issue, and came to learn that the Nazis ran a similar kind of sexual slavery,” Eschebach said.
Eschebach yesterday visited the House of Sharing in Gwangju, Gyeonggi, a shelter for victims of the “comfort women.” Inspired by her visit to Korea, Eschebach proposed a new exhibition about sexual slavery in cooperation with the Netherlands, Japan, Korea and Germany. Kim Yong-deok, Northeast Asian History Foundation president, welcomed the idea, and will make efforts to realize the plan.