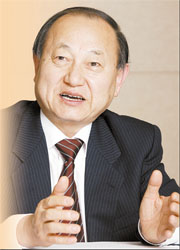 After years of serving as the Northeast Asian History Foundation president, Kim Yong-deok’s primary concern has become the issue of women who were forced to be sex slaves during World War II.
Kim, 63, is a seasoned scholar of Asian history specializing in the stormy history between Korea and Japan.
That said, it seems only natural for Kim to be fascinated this year by a news story in a German publication about an exhibition on women in concentration camps forced to be prostitutes by the Nazis.
The forced sexual slavery by the Japanese army of women from many countries, including Korea, remains an emotional issue.
Surviving victims and the international community have long urged Japan to fully acknowledge and apologize for the coerced nature of the war crime, to no avail thus far.
Meanwhile, the news on the Nazi sex slavery that attracted Kim told a different story about similar issues.
The exhibition was being held at the Ravensbruck Memorial Museum, which is publicly funded by the German government. The exhibition was an example of how the German government has openly and properly addressed its past.
Kim, who learned about the Nazi sex slavery by sheer chance during his routine check of international news publications, felt the urge to find out more about the exhibition.
After several phone calls to Germany, he got in touch with the Ravensbruck Memorial Museum, and finally brought the exhibition to Korea this week.
Kim’s Northeast Asian History Foundation opened the exhibition on Thursday, and it is scheduled to run through Nov. 30 at the Seodaemun Prison History Hall, in central Seoul. Admission is free.
The exhibition also features photographs and related artifacts regarding the so-called “comfort women” of Korea.
Kim hopes the exhibition will raise more attention to the wartime sexual slavery issue, noting that this year seems to be a prime time for settling the issue.
“We have witnessed the rise of international attention to the forced sexual slavery by Japan,” Kim said, citing resolutions that were passed unanimously by the U.S. House of Representatives and most recently by the Holland Lower Chamber of Parliament.
The European parliament earlier this month invited victims of sexual slavery for speaking tours, in another sign of rising international awareness.
“The sex slavery issue is not just about the unsettled past between Korea and Japan,” Kim said. “It is an issue that deserves international attention, as it was an infringement on human rights against women during the war, which should never happen again.”
A Seoul National University professor of Asian history with a doctorate in history from Harvard University, Kim said his confidence has grown by watching the international response to the issue.
The role of his foundation is to “establish historical truth and to contribute to peace and prosperity of Northeast Asia.”
Kim said the exhibition could be a timely opportunity to help heal some of the scars from the painful issue that has dragged on and kept Koreans and others in Asia resentful of the Japanese government’s denial.
Kim will use the exhibition as a stepping stone to further in-depth research at the foundation on the issue of sexual slavery.
“Until now, the primary task was letting the world know about the human rights infringements against the victims,” Kim said. “Now, there should be more efforts in giving academic interest to the matter.”
In doing so, he hopes to cooperate on research projects with Japanese scholars.
“We should note that there are still many Japanese people who take keen interest in the issue and hope for the proper settlement,” Kim said.