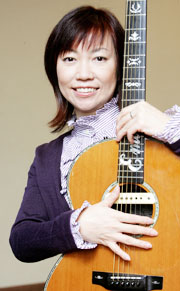 Emi Fujita: She reaches out to the disabled with her serene songs. [JoongAng Ilbo]

Japanese singer Emi Fujita, 44, had a promotional tour to Korea last month for her latest album, “Camomile Best Audio,” a compilation of three of her latest cover albums in the Camomile series.
Her songs have been a hit in Korea, serving as the backdrop for 14 Korean TV commercials, including Doosan Apartments, Samsung Everland and Samsung Card.
Emi and her husband, Ryuji Fujita, started the group Le Couple in 1994, singing in cafes in Japan. In 1997, Le Couple’s first album, “Hidamarino Si” became a megahit, selling 1.8 million copies in Japan alone.
Afterward she released her solo albums, the Camomile series, featuring cover songs of classic pop songs. With all her commercial success, Emi Fujita is also a favorite among critics with her heart-rending vocals.
In 2003, when the SARS epidemic spread in Southern Asia, her music was called “listening medicine” in Taiwan. The JoongAng Ilbo interviewed Emi during her recent visit to Korea.
Q. You have released a super audio CD, which is often used for classic music and jazz, but is rather unusual for pop songs.
A. I wanted to compile my latest Camomile series in this album. Digital CDs tend to sound a bit artificial, straying away from the original recorded sound. I really wanted to bring the “on-the-spot” sounds to my listeners.

Why cover albums?
I want to reinterpret these original songs in my own way. I cover mainly songs traditionally done by male singers, which might provide a different experience for the listeners. Also my songs can serve as a vehicle for the new generation to get to know these songs.

What do you think is the reason that your songs are used in numerous Korean TV commercials?
I saw the commercials in which my music is played and noticed that the visuals were very calm and serene, just like my music. My songs are comfortable and relaxing. I especially loved the credit card campaigns in which “Today” was used that Jang Dong-keon starred in.

I heard that you are a huge fan of Jang Dong-geon.
I think he is good-looking and has a great presence. I gave him my album with my autograph a year ago. He thanked me later on.

What do you think about the claim that your songs have a sort of healing power?
Four years ago, during a fan meeting held in Taiwan, one person told me that he could relieve his anxiety by listening to my songs. I was very moved hearing that my music had such meaning to someone.

I heard you often hold small concerts for disabled people.
Yes, I do. I once attended a concert for the disabled and noticed how they “felt” music with their whole body. I was moved and thought that was really what music is about. I’ve recently taken up sign language and plan to hold concerts using sign language.