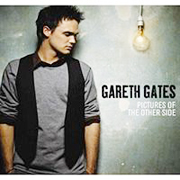 Everyone ought to remember English pop singer Gareth Gates’ first album, “What My Heart Wants to Say.” It was a big hit. Especially “Unchained Melody,” the album’s single, went to No. 1 on the UK singles chart and was voted Record of the Year in 2002. The lyrics and melody of “Anyone of Us” also remained in listeners’ hearts, especially in Asia. And then came his second album, “Go your Own Way,” which wasn’t such a hit, but deserved a listen.
Amid fan anticipation, Gates recently released his third album, “Pictures of the Other Side.” But the album isn’t doing so well ― it dropped out of the UK album charts.
There are, however, some catchy songs. “New Kid in Town” is addictive. “19 Minutes” is moody. The ballad “Can’t Believe it’s Over” is the kind of song you would want to listen when riding a bus on a rainy day. Gates came in second on the ITV talent show, “Pop Idol” and signed with Simon Cowell’s label.

Gareth Gates
Pictures of the Other Side
Genre: Pop/soul
Label: Sony BMG