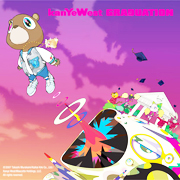 How many names can Kanye West drop in one album? Here’s a far from complete list: Rosie Perez, Barry Bonds, Kate Moss, Christian Dior, Louis Vuitton, Gnarls Barkley... I could go on.
Don’t expect the same depth in subject from this latest effort by the indisputably talented rapper: No songs about coping with a grandmother’s death or African blood diamonds here. But what “Graduation” does have are some outrageously catchy tracks, best exemplified by its first single, “Stronger.” With heavy emphasis on electronic elements, West’s unabashed bombast glares in lyrics like, “Bow in the presence of greatness ... / You should be honored by my lateness / That I would even show up to this fake s***.” These lines should normally elicit eye-rolls, but coming from West, there’s only one thing to do: Shake your booty.