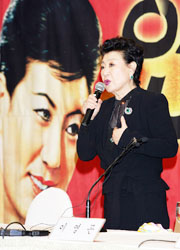 Half a century into her career, and Hyeon Mi is finally releasing a greatest-hits album.
The girl, once known as Kim Myeong-sun, started out singing at the American military base in Seoul during the 1950s. She’s now the country’s leading diva.
At a press conference on Nov. 6 to announce her “50th Anniversary Concert,” Hyeon Mi expressed her undying passion for music.
“I will sing as long as I can stand up and speak,” she said.
Her new album, “My Way,” offers a retrospective on her career and also introduces new songs. One previously unreleased track is “Everything You Left Behind,” written by her late husband, Lee Bong-jo. Lee, who died in 1987, wrote the song especially for his wife.
At the press conference, the diva fought back tears when discussing Lee’s death. “After my husband died, I worked a lot of night-clubs to support my family,” she said.
“I’m grateful that I am healthy and still able to sing. In some ways, I think my husband is looking after me from above.”
Hyeon Mi’s eldest son, Young Gon, 45, suggested making the album, and he sought the help of composer Ha Gwang-hoon.
“After 50 years in the business, it seemed a shame that my mother hadn’t recorded a greatest hits album,” said Young, also a singer. On Nov. 25 at the Sejong Center for the Performing Arts, he will sing in public with his mother for the first time. 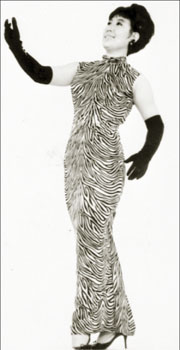 Hyeon poses for a promo shot during the 1960s. [JoongAng Ilbo]

Hyeon had a huge hit with her first single “Night Fog” in the 1950s when “trot,” an old form of Korean pop, was in its heyday.
In recent years, she has branched out as an all-around entertainer, hosting shows and making cameo appearances.
“She recorded seven songs in two hours and I was amazed at her enthusiasm and concentration,” Ha said. “I think she’ll be around for at least another 10 years,” Ha said.