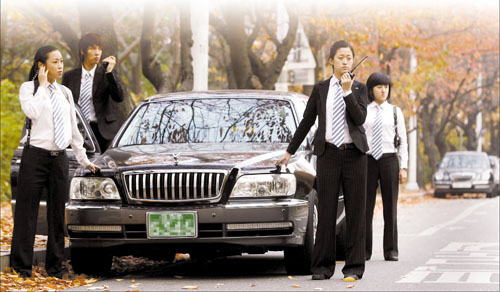 Bodyguards are heavyset, tight-lipped, ex-Special Forces agents who wear dark shades at night, speak into secret mics hidden in their shirtsleeves and spend a lot of time with their fingers to their ears listening for the the “code red” signal.
A bodyguard is the hero who scans the crowds and is ready to take a bullet for his president/boss/client without hesitation.
But such an image could not be further from the truth for Cho Mi-ran, a 27-year-old female bodyguard in Korea.
A team leader at BlueBird Women’s Bodyguard Team, a Seoul-based security and protection agency, Cho is assigned far less glamorous assignments than, say, Kevin Costner had in the 2002 film “The Bodyguard.”
In that movie, Costner is the former Secret Service agent hired to protect the pop singer Rachel, played by the real life singer Whitney Houston, from a stalker.
Cho’s work is more mundane in comparison, but no less important.
She looks after old women, protects children whose parents are busy at work and assists prominent female CEOs and politicians.
One of her most recent missions was to guard a girl who had transferred from a school in the countryside to one in Seoul. The girl’s parents were worried their daughter would be bullied because she had lived outside the capital.
It’s this kind of work that pays the bills for many female bodyguards in Korea, rather than protecting pop divas like the fictional Rachel.
Guarding people is big business here. The rich and the famous will pay big bucks to protect themselves and their families. According to the Ministry of Labor, the bodyguard industry, made up of around 2,700 private companies, is worth around 4 trillion won ($4 billion) annually.
The industry has been dominated by men for years, but since the late 1990s more women are getting involved. One factor is the increasing status of women in Korean society.
“More women are working and playing more prominent roles in Korean society,” said Ko Eun-ok, 29, who set up First Lady Security Company, the first independent all-female bodyguard company, in 2003.
“Female CEOs and politicians often feel uncomfortable with a man, but with another woman they feel more at ease,” she said.
Lee Hye-yeon, 26, of First Lady, typifies the new type of female bodyguards in Korea. Standing 5-feet-8 (172 centimeters) and weighing 136 pounds (61 kilograms), Lee was recently assigned to guard a middle-aged woman whose husband and son were threatening her.
Lee protected the woman around the clock until the couple divorced.
“I was like her shadow,” Lee said.
Whereas First Lady was the first private all-female bodyguard company, a leading domestic bodyguard company called Korea Security Service System paved the way. 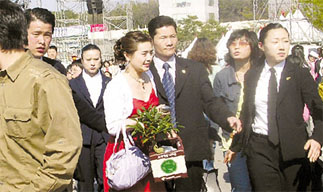 The BlueBird female bodyguard team guards a celebrity. Provided by the company

In 1997, responding to what it saw as a niche in the market, the company branched out with a separate department called the BlueBird Women’s Bodyguard Team. It comprises around 10 female bodyguards, including Cho.
BlueBird clients are mainly middle-aged women getting divorced, female university students harassed by stalkers and bullied children.
But breaking into the industry has not been easy for women. “Ten years ago I applied for a part-time job at a bodyguard company,” Ko said. “At first, the staff was skeptical because I wasn’t the weight-lifting kind of girl you see on television.”
She was not considered suitable.
But Ko perservered. Her long-time dream was to become a field operations commander, so she worked hard to get qualified. She earned a black belt in martial arts, completed thorough training in judo and wrestling and got more than 20 qualification certificates.
In 1997, Ko was rewarded with a tough rookie assignment: a bodyguard to the rock singer Kim Kyung-ho. Her job was to get the singer unscathed through legions of fans flocking outside the concert venue.
She did well, and she had the bruises to prove it.
Since then Ko has guarded former Soviet Union leader Mikhail Gorbachev, actor Tom Cruise and political scientist Robert Scalapino when they visited Korea.
After gaining more experience in the field, Ko noted an increase in the number of less rich and less famous people in need of protection. Kidnappings, sexual abuse, a rise in the number of acrimonious divorces and more cases of stalkers pestering women suggested to Ko that there was a gap in the market for a different kind of bodyguard.
So in 2003, Ko set up First Lady.
But what makes a female bodyguard better than her male counterpart?
Ko said looks are an important element. This doesn’t necessarily mean her bodyguards are beautiful. That would be too Hollywood. She means that the female bodyguards look less intimidating than males.
That “look” includes dark suits, white shirts, sensible shoes, toned down makeup and hair brushed off the face, according to Ko.
The “look” is also important for the clients. Lim Mi-hwa, a committee member at Korea Women Taekwondo Federation, once guarded a female Korean politician.
“That politician preferred a female bodyguard because it gave her a more positive and softer image,” Lim said. “It was part of her image-making.”
Being a bodyguard means spending a lot of time with your client so the relationship has to be professional, friendly and, at times, more intimate. Women can adopt these different roles, Ko said, because they tend to be more open-minded and are better listeners than men.
“Women are better communicators,” she said. 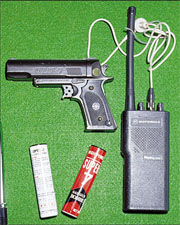 Tools of the trade include a gas gun, spare cartridges and a walkie-talkie. [JoongAng Ilbo]

Lim Tae-jung, a 23-year-old female bodyguard, agreed that it is a matter of brains rather than brawn.
“We may not be physically as strong as men, but we have our own merits that our clients appreciate very much,” she said. “It’s crucial that clients are not only physically safe but also emotionally stable.”
Cho, of BlueBird, said the physical element is overplayed in the bodyguard industry. A good bodyguard doesn’t have to deal with the physical, because the objective is to prevent incidents taking place, she explained.
Lee Gwang-nam from the International Bodyguard Association said the increasing demand for female bodyguards represents a cultural shift.
“Many clients now have a softer image of a bodyguard,” Lee said. “During the early 1990s, a bodyguard was conventionally a male ex-soldier from the Special Forces.”
If you want to train to become a bodyguard in Korea, you can choose from up to 240 courses at a number of two-year college programs specializing in the security industry.
The student body in the department of total security at Yongin University, for example, is around 20 percent female.
The majority of female students go on to join the police, private or public bodyguard companies, or work at the Blue House, a highly prestigious position.