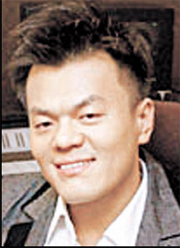 Park Jin-young has broken his six-year sabbatical with an aptly named album, “Back to Stage.”
“I’m nervous because this is the first time I’ve been on stage in six years,” Park said at a concert on Nov. 15 in Cheongdam-dong.
“I tried to make this comeback innovative in every aspect, from fashion to dance and even in the music videos,” he said.
Back to Stage contains songs the singer wrote during his six-year break.
“This album reflects how I’ve lived for the last six years,” Park said, “from the happiness to the sadness and the sexiness.”
Early in his career, Park often aroused the press with his sexy performances and costumes during his shows. His critics were quick to dismiss him as a copycat of Western pop.
But since establishing JYP Entertainment in 1999, Park earned critical acclaim for producing top teen idols such as g.o.d., Rain and Wonder Girls.
For his new album, Park worked with many notable musicians, including Dynamic Duo, Yoon Mi-rae and Bobby Kim. Min Sun-ye, a member of Wonder Girls, also collaborated with Park on the new release.
“It’s glorious to work with Park, who’s my producer as well as my teacher,” Min said.
By Lee Hyo-jeong