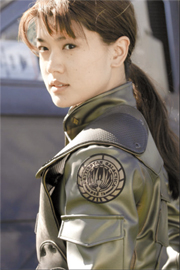 It’s not often that you find yourself identifying with creatures from another planet.
But that’s what happened to actress Grace Park in the American television series “Battlestar Galactica.”
Park, 33, plays pilot Sharon Valerii who discovers that she is actually a Cylon from the furthest reaches of space.
Cylons were created by humans, and, understandably, Valerii is faced with an identity crisis when she discovers the truth.
In her own life, Park has faced her own identity issues, though none as dramatic as discovering she comes from another planet.
But the show’s storyline ― the space battle between the Cylons and Earth ― has taught Park a lot about identity, love and politics, the actress said.
Park was born in Los Angeles, raised in Vancouver and is ethnically Korean. But she considers herself more Canadian than Korean, even though her parents brought her up with a strong sense of her Korean identity.
And when she visits Korea, Park said she doesn’t feel like a “complete” Korean because of the way she acts and looks.
The identity issue seeps into her professional life. Park has often been typecast as the “Asian,” playing Japanese and Chinese characters. It took time before she started to get offered a greater variety of roles.
Park is currently getting back to her roots as a Korean-Canadian in her latest movie.
She stars as Lila Lee in Michael Kang’s “West 32nd,” a crime drama dealing with New York’s Korean underworld.
The film spotlights the identity crises that many Korean-Americans face today.
While working with Korean-Americans, Park felt a strong connection. They felt like they were a “special family,” she said.
Her talents have been noted by Korean filmmakers as well. Park Chan-wook, the director of “Old-boy” and “Sympathy for Lady Vengeance,” has discussed the possibility of a collaboration.
Although the actress said Park’s films are innovative and unique, she has not been able to commit to a project. Her schedule is packed now that she has been cast in a new Los Angeles-based drama.
Even though she has found fame by playing a major role in Battlestar Galactica which airs in Korea at midnight every night on the Sci-Fi Channel on cable, Park doesn’t think of herself as a star.
Being a star would be exhausting, she said. Just dealing with her own celebrity status ― putting on make-up everyday and conforming to the image people have of her ― is a burden.
Instead, Park is much happier concentrating on her acting.
She got her big break starring with Jet Li in “Romeo Must Die” in 2000 before getting cast in the popular Canadian teenage soap series “Edgemont.”
Battlestar Galactica was first aired in 2003 and it’s now in its fourth season. 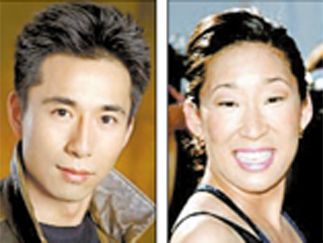 Grace Park is not alone. There are currently six Hollywood stars of Korean heritage appearing in American dramas this season.
They are Sandra Oh and Joy Osmanski in “Grey’s Anatomy,” Korinna Moon Bloodgood in “Journeyman,” Will Yun Lee in “The Bionic Woman,” Charlie Lee in “Chuck” and James Kyson Lee in “Heroes.”
Oh is well known in Korea as Cristina Yang on Grey’s Anatomy.
Osmanski is a Korean adoptee and Will Yun Lee is a second-generation Korean-American. Bloodgood has an American father and a South Korean mother and starred in films “Eight Below” and “Pathfinder.”
James Kyson Lee stars as Japanese character Ando Masahashi in Heroes.