Choi, 77, an actress who dominated Korean cinema, holds a copy of her recently published autobiography, “Confession.” By Kang Uk-hyun

When she placed the period at the end of the last sentence of her autobiography, Choi Eun-hee heaved a deep sigh.
All the fear, relief, love and tears that she has experienced in the past 77 years were encapsulated in that sigh, as if her own breath were within her book.
Choi’s life has often been described as more dramatic than fiction, and it has taken several decades for her to build the courage to write her own story.
Her autobiography, which came out this month, is candid. It tells about the dismal years of her failed first marriage, and her second marriage, divorce and reunion with the love of her life, director Shin Sang-ok. And, of course, she discusses the nine years she spent in North Korea after she was abducted on the orders of North Korean leader Kim Jong-il.
Her story is fittingly titled, “Confession.”
“I wrote my autobiography as if I were making a confession,” Choi said. “When I first started writing, I was afraid and hesitant. There were parts of my past that I was ashamed about.”
But Choi chose not to hide. She writes with a fierce honesty and refuses to gloss over her past, revealing a strength of spirit that has characterized her whole life.
Choi’s childhood dream was to be an ordinary housewife who waited for her husband and children to come home in the evening. That dream was shattered when she was raped by a South Korean army officer during the Korean War (1950 to 1953) and in her failed first marriage to the cinematographer Kim Hak-seong, who used to beat her.
Choi still feels the scars from the groundless rumors that have surrounded her for most of her life.
“I’ve lived through a great deal of misunderstanding throughout my whole life,” Choi said. “These are the stories that I have had to tell with complete honesty.” With a flash of a bitter smile, she said, “Everything I’ve been through has been fate. I couldn’t have avoided or changed it. For much of my life I’ve felt as if I’ve been struggling through a blizzard.”
Last week at her office overlooking the Han River, however, Choi looked tired. The passage of time has left crow’s feet around her eyes. Those marks have grown deeper since the death of her significant other, the director Shin.
But her eyes sparkle when she talks about the two great loves of her life ― Shin and films.
Choi has referred to Shin as “Director Shin” since the 1950s when they became colleagues, soul mates and then husband and wife. They were a celebrity couple who boasted prolific careers. They made some 130 films together, mostly under the Shin Film agency.
In private, Choi used to call Shin her “phoenix that would never die.” But, sadly, her phoenix passed away in April last year, leaving his own autobiography, “I Was Cinema,” which was published earlier this year.
Kim Jong-won, 70, a professor of Korean film history at Dongguk University, calls them “two giant stars” that shone together.
“It’s impossible to discuss the history of Korean cinema without discussing Choi and Shin,” Kim said.
Choi in particular is a symbol of the ups and downs that the Korean cinema has gone through, from the Korean War, military regimes and her abduction to North Korea, Kim noted.
The actress had the versatility to shine in theater and screen roles as diverse as Ophelia in Shakespeare’s “Hamlet,” a Korean prostitute in “The Flower in Hell” (1958) and the innocent widow in “The Mother and a Guest” (1961), directed by Shin, Kim said.
Choi was born in 1930 and joined the stage troupe Arang in 1943 to avoid the clutches of the Japanese army who drafted women Choi’s age to be sex slaves, or “comfort women.”
Choi soon graduated from stage to celluloid. But the Korean War broke out in 1950, creating chaos and confusion. Her husband began to beat her and Choi had to forage for food around Seoul. Then Choi was forced to go to North Korea to serve in an entertainment troupe for the communist army. She escaped, but a South Korean officer raped her at the border, threatening to kill her because she had worked for the North Korean army.
Back home, relations with her husband grew worse, but then in 1954, Shin appeared in her life. “Nobody had made such an effort to win my heart before,” Choi said.
One afternoon, Shin asked her out to have coffee. As she lit a Lucky Strike cigarette, a luxury she could not live without back then, Shin said, “You are the actress that I have been dreaming about. You are the muse that will never run dry.” Then he added, “Will you make films with me?” What he meant was, “Will you marry me?” 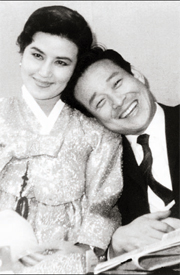 Choi Eun-hee, left, and Shin Sang-ok were the darling couple of Korean stage and screen for many years. Courtesy of Choi Eun-hee

“I am a woman with a past,” Choi told Shin, speaking about her husband and the rape, but Shin stopped her. “You have the look of someone who has suffered,” Shin said. “And that look makes you the actress of my dreams.” They spent a night at a shabby inn, a night they later called their wedding.
News of their relationship soon hit the headlines. Choi was described as Korea’s Ingrid Bergman, who was making the front pages at that time after she left her husband and eloped to Italy to be with the director Roberto Rosellini.
Kim filed a suit, accusing his wife of adultery, but the case was dropped because Kim had never properly registered the marriage.
Choi and Shin rented a room in Jangchung-dong, central Seoul, where they lived for years, a chapter in her life that Choi recalls as her happiest. They started to see the prime of their filmmaking years and made many movies.
Her only regret was that she could not have children. The couple adopted a son and daughter instead.
But in the 1970s, Shin and Choi’s relationship began to founder. Shin’s company was losing money and he was not happy with the heavy censorship under the Park Chung Hee military regime.
Then in 1974, Choi started to hear rumors that Shin was having an affair with a young actress named Oh Su-mi. Choi refused to believe what she was hearing, but she later read in the press that Oh’s two babies were Shin’s.
Choi filed for divorce, but that was not the end of their relationship. What followed is a story that reads like a screenplay.
In 1978, Choi went to Hong Kong where she was abducted by North Korean agents. She was whisked to North Korea where Kim Il Sung’s son and heir, Kim Jong-il, a movie buff, was hoping Choi could ignite his country’s flagging film industry.
Held against her will and forced to make propaganda films for the North, Choi discovered five years later that Shin had also been kidnapped and kept as a hostage of the Kim regime.
It was a reunion whose circumstances neither could have imagined.
The Shin-Choi pair was reborn in Pyongyang, and they earned several international film awards for Kim Jong-il and made propaganda films about North Korea. Then the pair engineered an escape while they were in Austria in 1986, and they sought asylum in the United States. 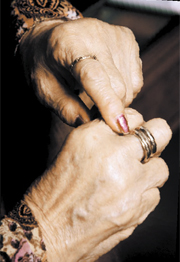 Choi Eun-hee wears a silver and gold ring that her husband Shin Sang-ok gave her before he died last year. By Kang Uk-hyun

They couldn’t return to Korea at the time because back home they had been accused of cooperating with the enemy, North Korea.
They returned to Seoul for good in 1999.
Looking back, Choi isn’t bitter. She said she can understand Kim Jong-il’s passion for cinema, and see why he had her kidnapped. But she blames him for Shin’s death. While in prison in the North, Shin caught the hepatitis virus which eventually killed him.
Choi also empathizes with the actress Oh, with whom Shin had an affair. “I feel sorry for Su-mi. As a woman, now I understand her pain,” she said.
Pausing for a moment, she added, “Acting to me was living other people’s lives, and it taught me how precious all kinds of lives are. I would have been long dead without acting.”
Choi is entering her golden age alone, her soulmate gone. She thought she would die soon, but these days she has a strong urge to live.
“There are so many things to be done,” Choi said. There’s an exhibition of photographs and work on Shin’s unfinished projects.
“My life has been full of spice ― sugar, salt, pepper, vinegar, you name it,” Choi said, gently rubbing the gold and silver ring on her finger. Shin gave her the ring and told Choi it symbolized unity.
“After all this time, it feels good that I have tasted the bittersweet things that life has had to offer.”