Voices from the African skyline

Voices from the African skyline 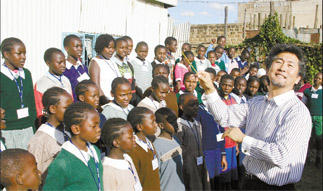 The rusted tin roofs of the slum neighborhood stretch forever across the skyline. Garbage lies everywhere.
Yet even in this depressed neighborhood, the clear sound of a children’s choir rings out.
This is Dandora, a suburb of Nairobi, Kenya.
The 80-strong choir is housed in a drab concrete building with a sign on the door that reads “Jirani Children’s Choir.”
Jirani means “neighbor” in Swahili, one of Kenya’s official languages.
The choir was founded in August last year by Good Neighbors International, a Korean humanitarian organization that has been working in Kenya for ten years.
The conductor is Kim Jae-chang, 51, who works full time in Kenya for the choir.
In June last year, Im Tae-jong, chairman of the Good Mission Network, a Christian missionary group with Good Neighbors International, asked Kim if he would conduct the Jirani Children’s Choir.
Kim, a professional baritone based in Korea before the move to Africa, studied music at Wonkwang University, South Jeolla, and later at Cimarosa Music Conservatory in Italy. He has won several awards, including the Napoli Zonta International Concours in 1993, Bellini Concours in 1994 and Rigoletto Concours the same year.
In 1995 he returned to Korea and sang in major operas and concerts.
Filled with a spirit of adventure, Kim, also a Christian, took up Im’s offer. He said he was interested because he had no previous experience conducting a children’s choir.
Kim landed in Kenya a month later. He said the neighborhood was worse than he had expected.
“People in the town couldn’t even afford one meal a day, and they looked through the trash to find something worth selling,” Kim said. “People had to eat rotten food from the trash,” Kim said.
Kim, used to standing ovations, plush concert halls and modern facilities, was apprehensive at first. But he said he was inspired when he imagined children living in poverty having the chance to sing in the world’s best theaters.
Kim held auditions at about 10 elementary schools in Dandora. “It wasn’t easy,” Kim said. “In most African schools, even in Kenya, there are hardly any music programs. Children don’t even know the basics,” Kim said.
Last June the choir sang at the anniversary of the founding of the Kenyan government.
“The choir received the best praise from President Mwai Kibaki and his wife as well as from 5,000 foreign diplomats,” Kim said.
The children sang “Doraji,” a Korean folk song, Kim said.
The Jirani Children’s Choir will perform 16 concerts in Korea until the end of January. They sing on Nov. 29 at at the Seoul Education Culture Center. The program will be a mix of African and Korean folk songs.
For more information, call (02) 6717-4000.