Toys by us ― a new hobby craze for expectant couples

Toys by us ― a new hobby craze for expectant couples 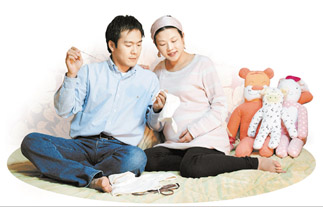 Kim Ho-won and Yoon Mi-ran surrounded by toys and clothes they made for their baby. by Kim Sang-sun

Yoon Mi-ran is spending the last weeks of her pregnancy hard at work.
She’s got toys to design, cushions to sew and mobiles to assemble. She’s busy, but help is nearby: Dad’s lending a hand.
Yoon, 33, is one of many expectant Korean women today spending their free time leading up to the birth of their babies making baby things with the help of their spouses.
For Yoon and her husband Kim Ho-won, 34, this is not just a hobby, like making model airplanes or knitting wooly hats for winter.
“We got involved in this pastime because we think it’s good for our baby,” Yoon said.
The theory is that the baby in the womb catches a sense of the warmth and teamwork the couple experience when they do things together.
“We think the baby in the womb can sense our happiness,” Kim said.
They made their first toy together ― a felt doll ― right after they found out that Yoon was pregnant. Yoon said the benefits are palpable.
“Since I took up making things for my baby, my mood has been more positive, and I’m getting along really well with my husband,” Yoon said.
The husband and wife team has so far made an assortment of cushions, dolls, a coat made of organic cotton, a black and white mobile and a rattle in the shape of a pig.
Yoon and Kim are typical of Korean couples today who share prenatal care duties. In the past, this kind of hobby ― making toys for kids ― was considered women’s work. Men thought it “unmanly” to get involved.
But the times, they are a-changing.
Today it’s not unusual for men to be found washing dishes, vacuuming around the living room and ironing their own shirts.
Soon-to-be dads are even reading fairy tales and chatting to their babies while they are still in the womb.
And it’s more common for men to take time off work to accompany their wives to the clinic for prenatal checkups.
A visible sign of this cultural shift can be seen at prenatal music concerts around town. More men are said to be attending such concerts, which are usually organized by baby product manufacturers or local governments.
Certain kinds of music are thought to aid a child’s development, especially after the 20th week of pregnancy when the child’s hearing has matured. Korean couples are keen to expose their children to classical music by composers such as Mozart.
Husbands say they attend these recitals because they provide good music for the baby and their participation is often a much-needed morale boost for their wives.
At a recent prenatal music concert at Hoam Art Hall in downtown Seoul, all 63 of the special “married couple seats” sold out. The seats cost 100,000 won ($108), and there were mainly married couples in the audience.
Prenatal concerts are gaining in popularity, according to Song Jeong-jin of Stage-One, an organizer of these concerts.
“We started prenatal music recitals in 2001,” he said. “Our package includes information related to pregnancy and lectures on prenatal care.”
At the recent concert at Hoam Art Hall, Shin Jong-chul, a professor at the Catholic University of Korea College of Medicine, was the guest speaker.
According to Stage-One, husbands sometimes buy the tickets themselves, and there was a recent case of a man buying a ticket for his daughter-in-law.
The products that couples like Yoon and her husband make are easy to put together and inexpensive. They buy the materials and instruction kits through the Internet.
Even people who are not particularly creative or good with their hands soon find themselves turning out hats, shoes and even warmers for baby bottles.
Prices range from 10,000 won for most items, and up to 20,000 won for the coats made of organic cotton.
There are about 50 different baby products available through G Market, an Internet shopping mall. The company said it sells on average around 300 kits, including do-it-yourself mobiles and rattles, and around 500 toy blocks and dollshouses every week.
But the products have more than just a practical value. Like diaries or photo albums, they serve as sentimental reminders of the pregnancy.
Lim Hyeon-ju, 35, said that her husband, an art major in college, built a wooden crib for their child. Every time she puts her baby to sleep, she recalls the anticipation of waiting for their baby to be born.
Another popular activity is to make album diaries that record the progress of the pregnancy.
Kang Hyeon-ju, 35, said her husband put their baby’s ultrasound shots into an album. As they flick through the album, they can see how the baby changed through each stage of the pregnancy.
Kang said the album reminds her of visits to the hospital and chats with the doctor about her pregnancy and her baby.
The album starts with a photo of Kang and her husband when they were dating, and at the back the couple has included a poetic note addressed to their son which tells the story of the boy’s birth.
The album is also proof positive that dad helped out, too.