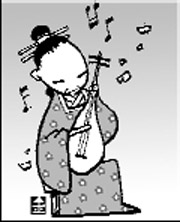 In today’s language, yoonrak means prostitution. Originally, however, yoonrak had much more poetic connotations. The word was first used to describe the sorrow felt by people who wandered disappointedly about the world, frustrated by the enormous hurdles in their lives. The word was made widely known to the world by poet Bai Juyi of the Tang Dynasty. By the time he was relegated to a less important post in today’s Jiangxi, he had written the best of his works, dubbed “Bipahaeng.”
When he was on his way home from seeing a friend on a clear autumn day, he heard a woman playing a mandolin by the river. After he found her and listened to the music she was playing, she told him her life story. She was a successful gisaeng, a singing and dancing girl in the capital, but began to be treated as a retired gisaeng as she grew older. So she got married to a peddler who lived in a rural area.
With a bowed head, she sang the blues, telling him about pleasant memories from her younger days and her current misery. He sympathized deeply with her because her story reminded him of his own difficult standing. He had been demoted to a sinecure in the countryside after being involved in a political strife.
He, who paid much attention to the deplorable lives of people living at the grassroots, recited, “We are in the same situation, roaming the world at the edge of the sky. Meeting people is pretty enough, irrespective of their age.”
Yoonrak originally meant failing to settle down, wandering at the edge of the sky in the face of impending crises. That meaning of yoonrak seemingly has nothing to do with the sex trade.
We are in low spirits after hearing somewhat bitter news lately. Some media sources say that Korean housewives and female university students have been going to Japan to work as prostitutes.
Many of them are working as prostitutes to raise money for their children’s tuition fees for private tutoring and university entrance fees, which has caused a pang of sorrow.
In fact, sources say, these wemen are badly damaged by felonious assaults and abnormal sexual requests. These women are heading toward the original meaning of yoonrak ― a wanderer at the edge of the sky ― going far beyond being mere sex workers.
Is it a phenomenon that results from the income gap between the haves and have-nots?
We need to think twice about whether globalization destroys the normal way of thinking and the values of our society.