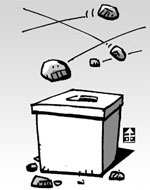 Abraham Lincoln is remembered as one of the greatest presidents in American history. However, the negative campaigning and mudslinging between the Republican and Democratic parties reached a peak in 1864, when Lincoln ran for re-election.
When President Lincoln’s Emancipation Proclamation took effect on Jan. 1, 1863, America was at the height of the Civil War. There seems to have been a widespread thirst for blood, as shown in the expression people used to describe the campaign, “warmonger Lincoln versus small fry Mac.”
The Democratic Party attacked Lincoln by calling him a variety of bad names -- including dictator, monster, ignorant Abe (Lincoln’s nickname), devil and a killer.
In turn, Lincoln drove General George B. McClellan into a corner by calling him a “poor loser.”
The United States presidential election in 2004, in which the incumbent President George W. Bush and his opponent John Kerry battled, was characterized by a nine month-long rough-and-tumble game of political campaigning.
They were eager to attack each other, focusing on the Iraq War and each other’s military service, each calling the other a liar and a fugitive.
In political circles ahead of the upcoming presidential election in December, the malicious propaganda is worse than usual, under the justifiable cause that the capacity of presidential hopefuls should be fully examined.
The mudslinging at each other is now so serious that even the previous battles between dictators and communists has been put to shame.
In the 1963 presidential election, Yun Bo-sun, then the opposition Minjung Party’s presidential candidate, raised an ideological controversy aimed at candidate Park Chung Hee of the Democratic Republican Party, saying, “Park might have been a communist who was deeply involved in the Yeosu-Suncheon Revolt just before the Korean War.”
Since then, attacks on rival candidates’ ideologies have resulted in a boomerang effect; the opposition party’s presidential aspirants have been attacked as leftists.
The Korea Manifesto Center recently called on the major presidential hopefuls to release a public manifesto by Nov. 25, outlining their various policy pledges.
Now that the current presidential election campaign has turned into an ugly mudslinging affair rather than a policy competition, voters are concerned about what will happen after five years of the next elected president’s term.