Getting back to nature down on the farm

Getting back to nature down on the farm 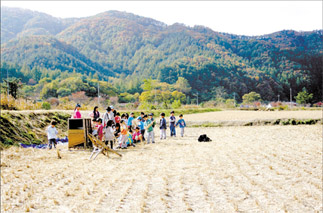 Children on the Sillon farm-stay program learn how to thresh rice. By Lee Eun-joo

YANGPYEONG, Gyeonggi ― The young farmer helped us on to the back of the tractor and we throttled over to the nearby paddy where we would get our first lesson in rice farming.
First we had to learn the names of the different tools and procedures.
“You cut the rice plant very close to the ground,” the farmer said, bending down to demonstrate. “Later you use a flail to thresh the dried rice stalks to separate the grains.”
We watched attentively. To most city people like me, rice comes in either a plastic bag from the supermarket or in a bowl served at the dining table.
This rice lesson was quite an education.
The farmer then shook the dirt and empty hulls off the rice using a winnowing basket, and next pounded it in a mortar to remove the husks.
This process is known as milling and hulling, he said, and we all nodded, recognizing those terms from long-forgotten books.
“Many children who visit our farm don’t realize that the rice they eat every day is threshed from rice plants,” the farmer said.
Perhaps some of the adults in the group didn’t either.
My lesson in rice farming was taking place on a farm-stay program in Sillon in Yangpyeong, Gyeonggi.
Sillon, a village of fewer than 90 inhabitants, is like any other Korean rural community. They produce corn, rice, potatoes, beans and other food stuffs.
But like many rural communities in Korea, Sillon was never a wealthy area. Few tourists visited in the past, even though the village is only a 90-minute drive from Seoul.
But all that changed in 2003 when the Ministry of Agriculture and Forestry selected Sillon for a special mission: hosting farm-stay programs that promote green tourism.
Sillon was chosen because of its proximity to Seoul: city dwellers can easily get there and back in a day, and still get a green-friendly day out.
At the same time, green tourism is allowing farmers to diversify at a critical time in the industry while helping promote traditional rural values and lifestyles.
“Promoting green tourism is a great way to expand our economy,” said Kim Ju-heon, 39, the head of the village.
Now, in addition to selling agricultural produce, Sillon runs activities based around traditional farming techniques for day-trippers.
The ministry helped set up the farm-stay program, and now Sillon boasts about 50 different activities throughout the year. 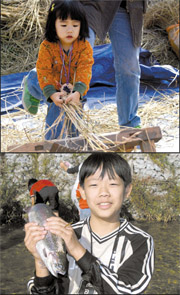 Child learns how to thresh rice stalks with a flail. a boy shows off a trout

Kim took responsibility and persuaded the other villagers that the project would lead to long-term benefits.
He was right. Since turning to green tourism, Sillon has prospered. In 2005, around 78,400 city dwellers visited, and the village made 1.7 billion won ($1.9 million).
But green tourism isn’t just about cash. Kim said the programs make a vital connection between tourism and traditional culture.
“The programs let you get close to the soil and you learn the value of agricultural products,” he said. Most are suitable for children aged over 10, but they need supervision. Farm tools are dangerous if used carelessly.
Autumn programs include harvesting rice, traditional village games, carrying an A-frame backpack, digging up sweet potatoes, making scarecrows and cooking maemil jeon, or buckwheat pancakes, and injeolmi, rice cakes covered with bean flour.
During the summer, you get to raft downstream and fish for salmon, and in winter you go sledding and prepare kimchi.
My full-day program began at 10 a.m. with a walk around the village. Passing villagers greeted us with cheery hellos. Back in Seoul, neighbors rarely greet each other in the morning with such warmth.
I had signed up to learn about rice, sweet potatoes and making traditional Korean snacks. I was joined by a bunch of six-year-olds and their supervisors on a school trip. The children had to dress appropriately because down on the farm you’re likely to get wet and dirty.
Naturally, food plays a big part in the activities. In my case, after the younger farmer taught us about harvesting rice, we got to sample a variety of rural snacks. They’re nothing like the chocolate, ice cream or candies city people devour during the course of a typical day. Snacks from the countryside are usually more natural, less processed and, increasingly, organic, like rice cakes and buckwheat pancakes.
Lunch was a feast: rice, soup and side dishes of fried anchovies, wild vegetables, dried seaweed, beans cooked in soy sauce and cucumbers pickled in salt.
Admittedly, there was no special dish, like bulgogi, or grilled marinated beef, but the meal was a hit. After spending half the day in the field, the food was much appreciated. Plus, everything you eat comes straight off the land around you.
The rice for the meal was cooked in a traditional iron pot, and the scorched rice at the bottom of the pot is used to make nurungji, another traditional snack.
To get to Sillon, I’d left Dongseoul Bus Terminal in eastern Seoul early in the morning. The road to Sillon passes Yongmun Mountain, which at 1,157 meters is thought to be the fourth-tallest mountain in Gyeonggi.

I was only staying for the day, but the farm-stay program allows overnight lodging in renovated thatch-roofed houses called a chogajip. The thatch, and the walls made of earth and wood keep the houses cool in summer and warm in winter.
The number of farm-stay programs in Korea is increasing. In 1999, there were 13 programs offered nationwide. There are now around 600, of which 17 are located in Yangpyeong, according to Yangpyeong County Office.
To help farm-stay programs establish themselves, the Korean Regional Innovation Committee hosts training sessions. This month some 160 regional residents interested in fostering rural economies and green tourism took part.
The expansion is perhaps related to the introduction of the five-day work week. Families from Seoul and other major cities have more time to devote to these kinds of green-oriented activities.
In addition to Sillon’s packages, farm-stay programs this winter will be held in Ogam Dotori Town, located in Yeoju, Gyeonggi. There you can go sleighing and make jipsin, traditional Korean shoes made of straw, and rice cakes. For more information, call (031) 883-6998 or visit www.ogam.invil.org.
At Buraemi Town in Icheon, Gyeonggi, farm-stay activities are held all year. Activities allow you to make pottery and learn about folk music from the countryside.
Buraemi in Korean means an emotionally and culturally rich town, which is appropriate. Buraemi is famous for its Pear Blossom Festival, and in 2005, the World Ceramic Exposition Foundation held the World Ceramic Biennale Korea there. You can call (031) 643-0817 or visit www.buraemi.com.
Wangsan Town in Gangneung, Gangwon, offers activities such as studying the stars under the night sky. With fewer street lights, the views of the night sky are much clearer from a rice field.
Sledding and making fermented soybeans are both popular farm-stay activities, and the town is famous for its traditional soy sauce, honey and corn. For more information, call (033) 648-1258 or visit www.nongchon.or.kr/home/wangsanri.
My program in Sillon ended in the late autumn afternoon as the day began to get chilly. On the bus back to Seoul, I realized how much I’d love to live in the countryside and I felt embarrassed that I knew so little about rural life. As the bus sped past Yongmun Mountain once more, I decided that once I am free of work and children, I might retire to the countryside, and learn more about rural living. Getting back to nature is addictive.

To get to Sillon by public transport, take a bus from Dongseoul Bus Terminal ― the nearest subway station is Gangbyeon, line No. 2 ― to Yongdu Town. Take a taxi from here to Sillon.
You can also take the train from Cheongnyangni Station, line No. 1, to Yongmun Station. Take a taxi from here, too.
Both journeys take about 90 minutes.
A one-day program at the Sillon farm-stay costs 30,000 won, which includes food. If you wish to stay overnight, you need to pay 50,000 won.
For more information, call (031) 772-3885 or visit www.stayfarm.co.kr.

Buraemi town in Icheon, Gyeonggi, is a well known village for its rice plants and potteries. Buraemi in Korean means “an emotionally and culturally rich town.” Traditional activities are offered all four seasons including making potteries and learning folk music.
Every April, the town holds a Pear Blossom Festival. In 2005, World Ceramic Exposition Foundation held the World Ceramic Biennale Korea.
A one-day trip starts from 10:30 a.m. to 3 p.m. and the price is 16,000 won for adults and 15,000 won for children. An over-night stay costs 40,000 won per person. To reach Buraemi town, there is a bus leaving every 15 minutes at Dongseoul Bus Terminal. It takes around one hour. For more information, call (031) 643-0817 or visit www.buraemi.com. 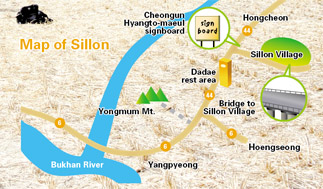 Wangsan town in Gangneung, Gangwon Province, also offers a farm-stay experience. The town was established in 1916 and surrounds Seongsan and Obong County. Wangsan town offers nature-experiencing activities during winter such as observing star signs, riding snow sleds and making fermented soybeans.
The town has its regional delicacies - traditional soy sauce, honey, corn and gill fungus.
To reach the town, take a bus from Dongseoul Bus Terminal that heads to Gangneung. It takes around three hours.
For more information, call (033) 648-1258 or visit www.nongchon.or.kr/home/wangsanri.