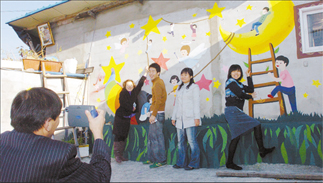 Busan’s Anchang Village has had a facelift. The village, with its winding roads, mountainsides and blue rooftops reminiscent of 1970s Korea, is now filled with murals and sculptures.
Last Friday, Bumil-dong in Anchang Village held a big event celebrating the completion of the “Anchanggo Project.” The event was organized by the Ministry of Culture and Tourism to give this low-income area a make-over through public art. Local students, curators from Open Space Bae (also involved in the project) and other residents were in attendance.
As visitors admired graffiti by artist Gu Ju-hyeon depicting two children pointing air rifles at each other, there were comments such as “Wow, those kids really look real!” Another of Gu’s graffiti artworks can be seen at the playground at Donggu Social Center. There is also a sculpture depicting ducks swimming near the playground. The artist, Park Eun-saeng, wanted to incorporate ducks ― the village mascot ― into the work. Another wall has paintings of watermelons and another shows sunflowers in bloom. Even Saint-Exupery’s little prince appears with his moon.
Empty houses have been redecorated on the outside as well with help from local artists, students from Pusan University’s architecture and art departments and students from the industrial art department of Silla University.
On the day of the celebration, there was also a short film titled “Anchangbyeolgok (The Song of Anchang).” The one-hour film, set in a rural town resembling Anchang village, captured the attention of the attendees.
The Anchanggo project cost 60 million won ($64,593) and was backed in full by the culture ministry. 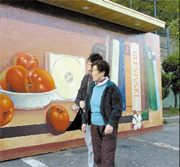 The event was organized by the Ministry of Culture and Tourism to revamp the area through public art. [JoongAng Ilbo]

The director of Open Space Bae, Suh Sang-ho, said “The project has merit in that local artists, students and other residents all united through art to make the village into a creative, lively place.”
There is also a space, aptly called “Anchanggo,” included as part of the village’s welfare center. It showcases the rich history of Anchang, including murals of an apple, CDs and books.
The work is by artist Shim Jeong-hwan, with the apple symbolizing prosperity, the CDs information and the books history.
Visitors to Anchanggo can see the documentary, short films, photography and art work related to the area. In Lee Uk-sang’s “Anchangyeojido (A Map of Anchang),” the village’s past and present can be seen in the old hanok-homes and the depiction of the everyday lives of residents, such as three elderly ladies playing Korean card games.
Said Suh: “The Anchanggo project has meaning in that it shows the possibility for a rather secluded part of the country to embrace its surroundings through art while retaining the history and authenticity of the area. This project signals a beginning for other areas in the region to refurbish.”