The center of the New York art market is in Chelsea, where three Korean galleries have opened recently. [JoongAng Ilbo]

In many ways, the current exhibition at the Seoul Arts Center is a homecoming show. “Contemporary Korean Art in the World: New York” pays a rare tribute to the first generation of Korean artists based in New York, a major capital of the art world, whose work had been largely neglected back home.
The exhibition, the first in a series, introduces a spectrum of artwork by Korean artists based abroad.
To kick off the New York segment of the series, the museum asked three American art critics to select 19 Korean artists currently working in New York. Selection was based on the artists’ entries in major auctions, art fairs, biennales and art shows.
The artists chosen are aged between 30 and 60, and they completed at least their bachelor’s degrees in Korea before they moved to the United States.
“We focus on artists who were born and educated in Korea, and who share a unique Korean sensibility,” says Yun Ji-eun, an assistant curator for the show. “We wanted to show how their art has progressed over the years, how it has been assimilated into the global art scene and how it reflects Western influences.”
On a deeper level, though, the exhibition endorses a recent trend: Many Korean artists are going abroad to major in fine arts or take up residencies. An estimated 2,000 Korean artists and fine arts students live in New York City alone.
The exhibition is also meaningful because it spotlights the growing demand for Korean contemporary art in New York. Three Korean galleries have recently opened in Chelsea, a hotbed of contemporary art. Arario Gallery opened its fourth branch in New York earlier this month. The gallery, located on West 25th in Chelsea, is run by Ci Kim, a prominent collector of works by young British artists who runs galleries in Seoul, Cheonan and Beijing.
Tina Kim Fine Art, an affiliate of Seoul’s Kukje Gallery, one of Korea’s most influential commercial galleries, recently relocated from 57th Street in Manhattan to Chelsea. 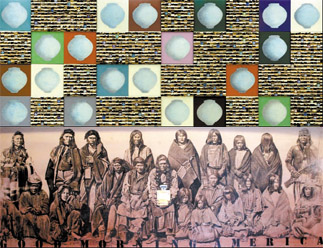 “Mountain, Wind” by Kang Ik-joong, above, and “Good Morning America Series” by Byun Jong-gon. Provided by the Seoul Arts Center

Tina Kim Fine Art is currently hosting an exhibition of the Korean artist Jung Yeon-doo.
And Gana Art Gallery, which has branches in Seoul and Paris, will open a third branch on 11th Avenue between West 24th and 25th. It has a ten-year lease starting next March.
Last March saw a major development in the story of Korean art in New York: Korean art by living artists was sold at a New York auction for the first time.
“Untitled” (1982) by the Korean painter Lee U-fan fetched $168,000 at a Sotheby’s auction of Asian contemporary art, and 22 other works by living Korean artists found buyers, including Bae Bien-u’s “From Pine Tree,” which fetched $48,000.
The British singer Elton John bought the same series of black and white photographs of the artist’s pine grove, a landscape unique to Korean mountains, at a London art fair in May last year.
Lee Young-ju, the curator of Arario Gallery, says the first annual Asian Contemporary Art Fair at Pier 92 in New York last week was a telling sign of the increasing enthusiasm among Korean galleries to penetrate the New York art market.
“Korean galleries made up a quarter of the 76 booths,” Lee says. “We [Koreans] were certainly the major players at the art fair.”
Even the director of the Guggenheim Museum is interested. Earlier this month, Thomas Krens attended the private opening of Arario New York in Chelsea.
Affiliates of major museums and local art dealers also showed up to see featured work by top-selling Chinese artists like Yue Minjun and Yang Shaobin.
Korean art has rarely enjoyed such popularity in New York. For years it was a hard sell. The names of Korean artists considered mainstream in New York today, like Suh Do-ho, Kim Sooja and Nikki Lee ― the first two dubbed along with Kang Ik-joong “the troika of Korean artists in New York” ― came to the critics’ attention much later.
The exception is Paik Nam-June, a renowned video artist who died last year.
The first major retrospective of contemporary Korean art in New York, called “Across the Pacific: Contemporary Korean Art and Contemporary Korean-American Art,” was organized by Queens Museum in 1993.
The show touched on contemporary issues and political themes that were universal to artists across the Pacific, such as gender issues and ethnic conflicts.
But even a decade before the retrospective, there were earlier generations of Korean artists in New York, like Byun Jong-gon and Kang Ik-joong, who are part of the current exhibition at the Seoul Arts Center. The story of the assimilation of these artists into the New York art scene reflects the stories of hardship experienced by many Korean immigrants to the United States.
Kang is typical of that generation. He moved to New York in 1984 and worked 12 hours a day as a store clerk. The only time he could paint was on the subway to work. Using a mini canvas, he did portraits of random passengers, scribbles of memorized English words and snapshots of his everyday life in New York.
The images piled up over the years to form a giant mosaic of the artist’s life. The work is now exhibited at the Whitney Museum of American Art on Madison Avenue.
Byun’s story is also emblematic. His career started strongly when he won a prestigious art award in Korea in the ’70s. But the success didn’t last. The Korean government accused him of anti-Americanism after he painted “Jan 28 1978,” which depicted an evacuated U.S. air base in Korea. Byun was blacklisted, and censorship forced him to move to the U.S. in 1981. He settled in Harlem, where he ran out of money for paint and was forced to use abandoned objects on the streets as his materials. 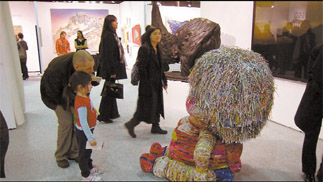 Three decades after winning his award in Korea, and before his work got censored, Byun had his first solo exhibition in Korea this year.
Soyeon Cho, an installation artist who moved to New York six years ago, says being a Korean artist in New York is like claiming to be “something from nothing.”
“When I talk to critics, they tell me that Korean artists are very hard working and outstanding as individuals,” says Cho, who majored in fine art at Seoul National University.
“But they admit that we haven’t had the same attention as ethnic artists like Chinese or Japanese artists, for example. Instead we are more exposed to the art scene as individuals. But that might work to our advantage in the long run.”
Cho has created “Self-Portrait,” a giant flower made out of plastic forks and black masking tape, for the current exhibition at the Seoul Arts Center. The work alludes to the artist’s identity in the city: transforming trash into art through manual labor.
Korean artists have come a long way in New York, but as the market expands, some worry that the unique identity of Korean art could get obscured. And they’re not sure how the newly opened Korean galleries will affect their reputation.
“Will the galleries be interested in featuring the work of emerging Korean artists in New York?” Cho asks. “Or are they going to bring established Korean artists from back home? Or will they end up featuring best-selling Chinese artists, even though they call themselves Korean galleries.”
These galleries will play a crucial role in defining the future of Korean art in the city, she says.