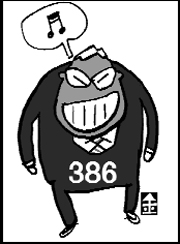 There is a term, “Gangnam leftists,” which refers to people who live a rich life but have a proletarian mind.
Originally it was used to make cynical remarks about the self-contradictory behavior of the so-called 386 generation.
However, it has more widespread use these days.
According to Kang Chun-man, a professor at Chonbuk National University, it is a general term for people who have a leftist mindset but enjoy bountiful lives.
Of course, “Gangnam” indicates not where people reside but a social class that enjoys economic privileges like the level of wealth in the Gangnam area of Seoul.
In short, Gangnam leftist means the well-educated and high-income population with a mindset focused on liberal ideology. Gangnam leftists have a variety of jobs.
In particular, there are many people in cultural and academic circles.
As a matter of fact, the liberalism of the cultural circles applies to all times and places. Culture is created in a form of attack on existing social values, culminating in the overturning of conventional ideas.
Even multi-millionaire Hollywood stars have long advocated liberal values, rather than conservative ones, in their political views.
Hollywood has often favored the more liberal Democratic Party, though there are exceptions. Ronald Reagan was a Hollywood actor Republican and Orange County, in the middle of liberal California, is conservative. So pockets of political contradiction can exist side by side.
It is undeniable, however, that the liberalism of intellectuals and professionals, who are commonly called the bourgeoisie of conscience, has contributed greatly to social movement and change in Korea.
In addition, the existence of Gangnam or cultural leftists indicates that the ideological spectrum of our society has more variety than ever.
The fact that people have different opinions on politics, the economy, culture and social issues is evidence of ideological diversification. People may be leftists on political issues, but they may be conservative on other matters directly linked to their own benefit ― such as education, non-regular employment and taxation.
The presidential election is just around the corner. What will be the choice of the Gangnam or cultural leftists?
They have made great contributions to the inauguration of participatory government.
Their choices might serve as crucial variables in the upcoming presidential election.