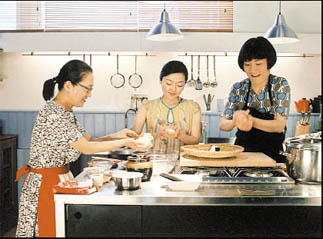 It’s a schizophrenic experience being both Korean and a fan of Japanese pop culture. The other day I found myself humming my favorite Japanese rock music on my way back from an interview with women who had been forced to work as sex slaves by the Japanese military during World War II.
But living in the past forever is not the best way to achieve stability or the best way to sustain relationships, which is one of the themes explored in “The Kamome Diner,” a surprise hit in Korea last year.
I admit I first watched a pirated version of this film, but I loved it so much that I bought a ticket to see it at the cinema. I wanted to appreciate the film on the big screen. And now I have the official DVD release at home.
The Kamome Diner is directed by Naoko Ogigami, 35, who makes films about women, not from a strictly feminist point of view, but just real stories about women and their lives. Her latest movie takes us to a quiet neighborhood in Helsinki where Sachie (Satomi Kobayashi) lives. Sachie has emigrated from Japan to start a new chapter in her life in Finland. She opens a small eatery called the Kamome Diner, which serves simple Japanese food such as rice balls, or onigiri. She calls this the “soul food” of her home country. The name of the diner, Kamome, means seagull in Japanese, and the film fittingly opens with a closeup of a seagull.
Not much happens in the movie, to be honest. The action is low key and depends on quirky characterization and subtle humor rather than high drama.
Business is slow at the restaurant until one day a young Finn called Tommi appears. Tommi loves Japanese pop culture and asks Sachie for the lyrics of a song from a Japanese anime. Sachie wants to help the young man and in a downtown bookstore, she asks a Japanese tourist. The tourist, Midori (Hairi Katagiri), happens to know the lyrics by heart, and the two become friends.
That pretty much sets the tone of the movie. Friendships are made, different customers come into the diner, eat and leave, but during the process they share their hopes for the future as they try to move on from their painful pasts.
Ogigami does not bother with the details of what has happened in the past to her characters. Instead, she lets the camera track the lead characters, all women except for Tommi, as they dine on Japanese dishes, drink fragrant coffee and get to know each other better. The food is indeed “soul food” as it heals and regenerates everyone who comes into the diner in much the same way as Percy Adlon’s 1987 comedy “Bagdad Cafe.”
With relatively little action, the film depends on quality acting, and the performances of the Japanese actresses, all well established in Japan, hold the picture together.
Thankfully, this DVD comes with English subtitles, which is not the case with many DVD releases of Japanese movies. But the special features section is unimpressive. There’s just a Q&A with Ogigami and her Korean audience during a visit to Korea earlier this year for the film’s opening. And this clip is not subtitled in English, which is a huge drawback. The director talks about her desire to make a film that genuinely stems from a woman’s perspective. “I sometimes get offended when I see women characters in films made by male directors,” she said.
The film opened in two small theaters, but popular demand took the film to more than 150 screens. It was also well received in Korea at the Japanese film festival.
Ogigami’s latest film, “Megane (Glasses),” which also stars Kobayashi, opens next week in Korea. Let’s hope that DVD gets English subtitles, too.