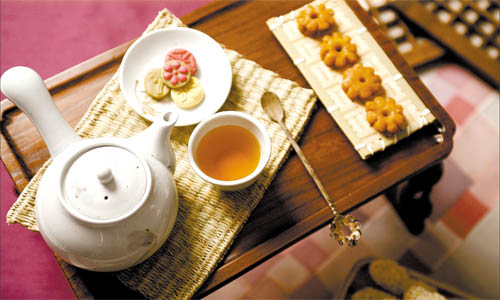 The round-shaped dasik are eaten during Korean tea ceremonies, and the brown cookies on the right are called yakgwa. Provided by Hangwawon

POCHEON, Gyeonggi ― Sometimes you have to suffer pain to experience pleasure.
That’s what Allan Hodes must have been thinking after kneeling for nearly an hour during a lesson on making traditional Korean crackers.
Hodes, an English teacher at an elementary school in Pocheon, was so uncomfortable that he had to lie down. The South African didn’t realize making traditional Korean sweets would be so taxing.
But the final product made the pain worthwhile.
Hodes and his fellow American teachers, Carly Dandrea and Michael Johnson, were taking a class last Tuesday afternoon with their Korean colleagues at an education center in Hangwawon, Pocheon.
The center, which will open a confectionery museum in early December, runs sessions on making Korean rice crackers and conducting a Korean tea ceremony.
To make the crackers, called gangjeong in Korean, Hodes and his friends were first given crispy rice cakes that they dipped in a ginger and honey sauce and then rolled with popped rice. Pumpkin seeds, slices of jujube and honey-covered raisins were added next.
Dandrea proved a dab hand at designing flower-shaped patterns on her crackers, and Johnson, just for fun, had made funny faces on his crackers.
Hodes, his aching back and legs now recovered, said the crackers were not too sweet, and not too thick; just the way he liked them.
Confectionery expert Chung Kil-ja, designated an intangible cultural asset by the government, said the rice crackers that Hodes and his co-workers had made were just one of several kinds of Korean confectionary. These sweets and candies date back centuries, Chung said.
Korean traditional confectionary is called hangwa. Han means Korean here and gwa means fruit. This is odd, because even though fruit slices are used in Korean sweets, they are not required. 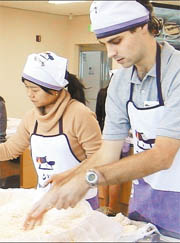 “People in Asia made cookies and snacks as substitutes for fruit when it was out of season,” Chung explained. Some experts claim that this custom might have started in India, where treats were used in religious services.
Real fruit was called saenggwa meaning raw fruit, while confectionary was called jogwa, meaning “created” fruit.
The tradition and practice of preparing confections is thought to have traveled to China, Korea and then to Japan, Chung said. These three countries developed their own particular tastes: the Chinese mostly used flour, whereas the Japanese preferred rice powder. Koreans, Chung said, used both.
Yugwa, also known as gangjeong, is one of the most popular confectionary treats. Making these crispy snacks is demanding and time-consuming, as Hodes and his friends found out.
First, you have to soak sticky rice, or chapssal, for some time in water and then grind it into a powder. You then add a drop of alcohol and some bean juice. The dough is then kneaded, steamed, dried and finally flash-fried in hot oil. You can add honey or molasses to taste, and finally sprinkle on some popped rice.
The best known variety of yakgwa, Korean pastries made of friend dough, is yumilgwa. To make this delicacy, you pound flour, honey, sesame oil and ginger juice into a dough. The dough is then cut into round shapes and browned over a medium flame. You finish off by coating the cracker in honey or molasses, and sometimes a dash of chopped pine nuts.
Other kinds of yumilgwa include suksilgwa, dried and boiled slices of fruit such as jujube and chestnuts, and jeonggwa, dried fruit coated in sugar or honey. Gwapyeon is like a jelly made of honey, boiled with cherries, apricots and quinces.
Chung makes special mention of another kind of traditional confectionary, dasik, which literally means “eatery for tea” in Chinese characters. Dasik are soft pastries made from rice powder, chestnuts, pine pollen and honey. Dasik are usually round and pressed into molds with the Chinese characters for longevity, wealth, health and fertility pressed into the dasik dough.
Chung said the beauty of dasik is in the color, which is created using natural ingredients like flower extract and grain powder. Pine pollen, a costly additive, turns the dasik yellow, Chung explained.

Yakgwa, Korean pastries made of friend dough mixed with honey and sesame oil. Provided by Hangwawon.

Lee Youn-za, an expert on Korean traditional tea, said dasik are an indispensable part of the tea ceremony.
“Confections add to the flavor of tea. In high class society, dasik was always served with tea,” Lee said after giving a talk to the Hodes’ group at the confectionary education center last Tuesday.
Chung said expert confectionary makers need to be highly creative. Decoration is a key part of the process. You can decorate the cookies and snacks using assorted colors and shapes and adding sliced fruit and pine nuts.
“The decoration itself is a work of art,” Chung said. It can also be fun, she said, as people can make up their own patterns.
“Modern-day confectionary items don’t always have to be round,” Chung said. “You can create your own designs and styles, and make cooking fun.” Hence Johnson’s funny faces on his rice crackers.
Chung, though, is worried that Western-style candy and cookies have become too popular in Korea.
“Traditional sweets are not exactly a health food,” Chung said. “They are, after all, sweets. But Korean confectionary is made from natural ingredients and we use less chemical additives.”
Kim Kyu-hun, the head of the Hangwawon education center for traditional confectionery, agreed, which is why Kim is planning to research further into modernizing traditional confectionery and is opening a museum as part of a long-term project to promote Korean sweets.

What encourages Kim these days is the rise in demand for traditional snacks as gifts. There’s been greater interest in the past few years for giving assorted confectionary items as gifts at Lunar New Year and Chuseok, Korea’s Thanksgiving Day. A box of these sweets can cost well over 200,000 won ($214).
This gift-giving culture is not something new, Chung said. Home-made sweets and cookies were often given out as gifts in the past, Chung said.
“Rice cakes tend to go hard easily, but confectionery lasts longer,” Chung said. “This was why it has become a favorite gift for holidays.”
Not surprisingly, visitors to the Hangwawon education center were given a few bags of assorted treats to take home with them as souvenirs.
The hardest part is deciding whether to give them away as gifts, or eat them yourself.

The HanGwa Culture Museum and Education Center is about a two-hour drive from central Seoul. For more information, call (031) 533-8121.
There is a traditional rice cake and confectionary education center in Gahoe-dong, Jongno, central Seoul. It’s run by Chung Kil-ja, a government designated intangible cultural asset. The center, which runs cooking classes as well, can be contacted at (02) 3673-4344.

1.Mix the flour with the sesame oil.
2.Boil the ingredients for the syrup. Let it cool down and add two tablespoons into the dough, together with the rice wine. Flatten the dough into small round-shapes.
3.Add patterns to the face of the dough.
4.Fry the dough at 150 Celsius until the surface of the dough browns. Remove and dip in molasses.
6.Garnish with chopped pine nuts.