Knowing when to leave

Knowing when to leave 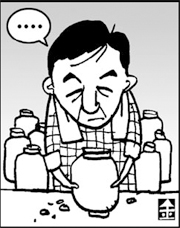 Morihiro Hosokawa was the 79th Japanese prime minister. In 1993, he headed the first non-Liberal Democratic Party government in 38 years, sending the LDP, known as the unsinking leviathan, under water. His grandfather from his mother’s side is Fumimaro Konoe, who was a Japanese prime minister three times. His father, Morisada Hosokawa, was a marquis. In short, he was born into a noble family. However, he had a very strong uncompromising nature. During his middle school days, he got angry at the Spartan- style classes and gave up studying. Even after he was put in the same class with his younger brother, his grades were always poorer than his sibling’s. Instead, he read the biographies of leaders. He read carefully about the lives of politicians who changed history. His political philosophy was, “We must know when to disappear. Only then can flowers be flowers and people be people.” It was an idea carved deeply within himself.
Maybe this is why he gave up re-election as the governor of Kumamoto after serving for eight years. Even after becoming prime minister, he was busy with reforms and revised the system of distributing administration posts according to cliques. He forbade officials from visiting geisha houses, a symbol of closed-door politics. With the people enthusiastic about him, Hosokawa served just eight months as prime minister.
When he became sixty in 1998, he retired from politics. He built a small Buddhist temple in Yukawara, Kanagawa Prefecture and spent his time working in the field and reading at home. His title is now “Potter Hosokawa.” The pottery skill that he learned beginning in 1999 is now a source of pride.
The world of politics, where he served for 30 years, often asked him to return. But every time he would respond, “It is time for the younger generation. I am going after the ideal that I have long had in my mind.” He is always regarded as a top former prime minister whom many Japanese greatly admire.
How about Korea?
Kim Young-sam remarked, “When I was in office, I ordered a stop to the investigation of slush funds for Kim Dae-jung, who was then a candidate.” Kim Dae-jung retorts that it is “not true.” Now no one is interested. Kim Young-sam even shouts at candidate Lee Hoi-chang, “Become a human being first before trying to be a president.” Kim Dae-jung advises the liberals, “First unite in the president election and then you can unite during general elections after winning the presidency.”
Why can’t we have a former president we can admire?