Everyone loves a good TV murder

Everyone loves a good TV murder

Investigating a crime scene is no longer the jurisdiction of just the police. Thanks to the never-ending supply of criminal investigation television series, viewers are now armchair experts on fingerprinting, reading blood splatter and estimating time of death.
Gil Grissom from “CSI: Las Vegas” and Horatio Caine from “CSI: Miami” are now household names. Incredibly, the movie channel OCN played 50 hours of non-stop CSI over the last Chuseok holiday.
That was a lot of TV crime.
But now Korean scientific, psychological and historical crime documentaries are challenging the American shows.
Korea first ran its own criminal dramas during the 1970s and 1980s. The actor Choi Bul-am played an investigator in the MBC TV series “Investigation Leader.” Wearing a gray trench coat and with a cigar clenched between his teeth, Choi depicted the archetypal Korean detective. 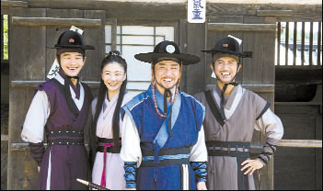 The current Korean TV crime series are very different from Choi’s show. Q Channel, YTN Star and OBS TV have co-produced 13 episodes of “Murderer,” the first attempt to create a criminal-psychology documentary here. The first episode aired two weeks ago.
The show focuses on murder cases from the killers’ point of view. In one episode, a murderer under the assumed name Cho Dong-gu tells his own story.
“I couldn’t live without murdering someone,” he said.
We see Cho sitting alone in the corner of a room. He then leaves the house, holding a deadly weapon in his hand. He boards the last subway train and heads to his hunting ground where he stalks his prey. He spots a woman in her 20s and kills her.
Cho murdered 13 persons wandering around Seoul’s southwestern districts.
On the program an acclaimed criminal psychologist, a detective in charge of the case and a criminal profiler who studies criminal behavior analyze why Cho acted that way.
In other episodes, we learn about the university student who slaughtered his parents in 2000 and a businessman with multiple personalities who killed at night.
Cable channel MBC Dramanet also broadcasts its own crime investigation series. “Byulsoongum,” crime busters from the Joseon Dynasty, mixes historical drama with forensics. One episode involves the death of a female aristocrat from the royal court.
TvN’s “I’m a Cop!” takes place inside a police station. Six cameras are used to capture the action. Hwang Eui-cheol, the producer of I’m a Cop!, said that he wanted to depict Korea’s criminal element in all its violent glory.
“The show will be as realistic as possible without exposing investigating techniques,” Hwang said. 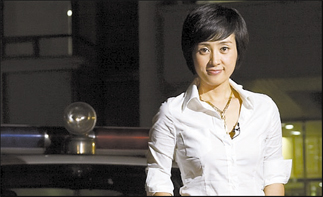 TvN’s “I’m a Cop!” Provided by the organizers

Byulsoongum is based on penal research books that were used during the Joseon Dynasty. Officials investigating homicide consulted “Heumheumsinseo,” which was written by the 18th century Korean scientist Jeong Yak-yong. It’s a collection of judicial precedents from China and Korea.
Similarly, Q Channel’s Murderer uses primary sources ― protocols, documents and interviews to give the series objectivity and authenticity.
Choi In-cheol, a psychology professor at Seoul National University, anticipates that these kinds of series will be even more popular in the future.
“Following the hit American CSI shows, the Korean public has become greatly interested in scientific reasoning and logic,” Choi said. “Korea’s own programs will help increase demand,” Choi said.