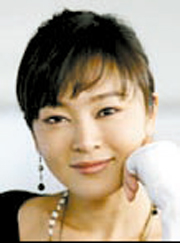 It’s been 15 years since actress Lee Seung-yeon, 39, made her debut as Miss Korea, but this year may be her happiest.
At the end of this month, she is tying the knot with Kim Mun-cheol, a Korean businessman living in America. Kim is two years younger than Lee.
At a press conference last Thursday, Lee said she is “embarrassed, mortified and tense, but at the same time very happy” at the prospect of marriage. She feels as if she’s becoming older and wiser as her big day approaches.
“I will try my best to become a good wife, daughter-in-law and daughter,” Lee said, alluding to a 2004 incident in which she made headlines for posing as a “comfort woman” in erotic photos and videos.
Lee and her entertainment company had hoped to promote the plight of the former sex slaves by raising money from the photos.
But some former comfort women were so outraged that they insisted the project be canceled.
The wedding ceremony will take place over two days at a beach resort in Yangyang, Gangwon.
Let’s hope her married life is less of a roller-coaster than her career.
By Lee Eun-joo