‘Once,’ twice, three times a winner

‘Once,’ twice, three times a winner 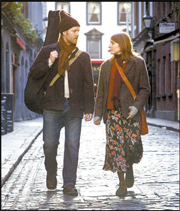 
When the independent Irish music film “Once” opened here in September, few expected that it would be a box office success. But in just two months it sold 160,000 tickets locally, and more cinemas will screen the movie because of growing demand throughout the nation. The distributors, Jinjin Pictures, hope to sell more than 200,00 tickets, making it the highest-grossing independent film in Koera.
Directed by John Carney, Once is a low-budget film that features the musician Glen Hansard in the leading role and his band, the Frames. The plot is based around a Dublin busker (Hansard) and a Czech musician (Marketa Irglova) and how their songs bring them together, musically and romantically.
It’s not a conventional love story, and, interestingly, neither Hansard nor Irglova is a trained actor. The narrative is interspersed with songs like “Falling Slowly” and “Lies,” which are currently huge hits among Korean fans.
Not surprisingly, the soundtrack has sold more than 23,000 copies. In today’s sluggish CD market, an album that sells over 15,000 copies is a success.
Making the most of their newfound fame, The Frames released their first album in Korea when their 2001 album “For the Birds” hit the stores last week.