The granny who upstaged the politicians

The granny who upstaged the politicians 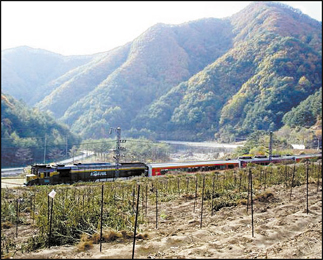 A scene from the picture-perfect “Images of Poems.” [KBS]

Socrates and Buddha are great sources of inspiration and wisdom. But the words of Mun Ok-sun, 83, with her crooked back and deep crow’s feet around her eyes, are equally astute.
“We come into this world empty-handed and naked, and we go back empty-handed and naked. Don’t get greedy. It’s no use,” said Mun, as she exercised on the mountains in Imsil County, North Jeolla, during an interview with the KBS-TV show, “Poems of Images ― The Journey of My Heart.”
This is a documentary about ordinary people. Every week the program travels to a different town to record the lives of ordinary people.
It airs at 7:10 a.m. on Sundays with reruns on Wednesdays at a quarter to 1 a.m.
When I ran across Mun in last week’s Wednesday rerun, I was still thinking about the recent spate of bribery scandals concerning the frontrunner for the presidency, Lee Myung-bak. The preceding program had been the investigative news show, “Current News Tonight,” which focused heavily on the scandals.
The story concerns the whole nation; I’m not the only one to be curious about it. But the news show was full of speculation, lies and accusations of forgery, just like with all the other media organizations in the run-up to the presidential election on Dec. 19. All that scandal left me feeling uncomfortable, and I just drifted into the next program, Poems of Images, featuring Granny Mun living in the country.
Suddenly I found myself watching real people who are faithfully leading their own lives, free from the bribery scandals and the mudslinging that characterize much of political debate these days.
Granny Mun doesn’t care whether those BBK company documents have been forged or whether Samsung has a slush found or not. What matters to Mun is taking good care of her plot of land and to make sure she gets a bumper crop of beans this year.
The cameras then captured the scenery surrounding Lake Okjeong. From a wooden boat floating on the lake to a train traveling through forests of colorful leaves, every single shot is worthy of inclusion on a calendar of photographs for tourists. Against this backdrop, the narrator slowly recites poetic lines, such as, “Everyone carries a scar in their heart that will only heal with the passing of time.”
The chief attraction of this show, however, is neither the picturesque images nor the poetic lines. It’s real people like Granny Mun who make this show stand out. Forget Lee Myung-bak, Kim Gyeong-jun and the bribery sandals, at least for the duration of this short documentary, and revel in the simplicity of the countryside and people who live there.
They are the backbone of the country, and KBS-TV deserves credit for making a series that brings to the public the lives of people who would never normally get the chance to hold a press conference or get interviewed on a talk show.
The show proves that we all have interesting and intriguing stories to tell.
It was also ironic that the bucolic charms of the countryside were competing with the intense debate surrounding our domestic political situation. I knew that as soon as this show was over, I would once again be besieged with news abut bribery scandals.
So I cherished those few moments with Granny Mun.
It was also pleasant to reflect that although presidential candidate Lee might be a familiar face on television, he doesn’t have the power to overshadow the sublime pleasure of hearing about Mun’s harvest of beans and her life in the countryside.
Perhaps those involved in scandals should take on board the words of Granny Mun and remember that we come into the world with nothing and we leave with nothing, too.