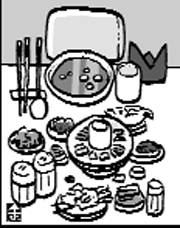 There is an internationally renowned Japanese restaurant in Manhattan called Nobu, the flagship of chef Nobuyuki Matsuhisa.
Some of its superstar guests have included David Beckham and Paris Hilton.
Even though it is known for sushi, we often see that dining guides in magazines, as they please, categorize it as a Japanese restaurant or as an Asian restaurant or even as a Western-flavor restaurant.
Matsuhisa, the world’s leader in innovative Japanese cuisine, is celebrated for his food philosophy, called the “Nobu Style.”
In other words, he has the great ability to blend classical Japanese techniques with exotic global flavors, culminating in leading the sushi to perfection, which matches excellently with entertainment, fashion and art.
“Food is not a simple means to feed oneself; it should be blended with beautiful dishes, extraordinary music and a gorgeous piece of art,” said Cho Tae-kwon, the CEO of the Korean ceramic kitchenware maker Kwangjuyo.
In this regard, we see a thread of connection between the ideas of Matsuhisa and Cho.
Matsuhisa partnered with actor Robert De Niro for his restaurant in New York and Giorgio Armani for his Milan outpost.
He has been at the forefront of introducing celebrity marketing strategies.
It is surely no accident that Tokyo was ranked the best gourmet city, according to the latest rating by France’s world-famous dining guide Michelin.
The guide showed that Tokyo has an abundance of French and Italian restaurants, standing out even above restaurants in Europe.
Twelve food experts from France, Japan and Thailand recently paid a visit to Korea to share their views about Korean cuisine.
Even though they ate tasty well-being food and soybean curd salad, and called them “wonderful,” they never forgot to comment bitterly about the negative side of Korean food.
There were many criticisms: “Korean food is difficult to standardize due to its difficult recipes,” and “There are too many side dishes, leading to a waste of food.”
One expert said, “The dining table for Korean cuisine reminded me of Korea’s notorious traffic jams. Foods need room to breathe.”
We need to look at the cynical reality: Korean restaurants are disappearing in top-class hotels because they aren’t attracting enough foreign guests. It is high time to institute reform policies to improve the quality of Korean foods.