No need for a survey, just ask soothsayers

No need for a survey, just ask soothsayers 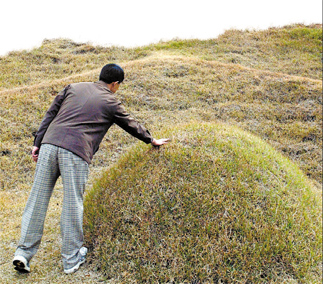 Lee Soo feels no need to trawl through the lurid details of rumors and scandals swamping presidential contenders this year.
That’s because Lee knows who’s going to win. He’s a fortune-teller, after all. Lee and his fellow soothsayers gain prominence in the heat of a campaign as politicians and the public are eager to hear their divinations.
So great is their influence that in past elections fortune-tellers have helped turn the tide, and this year is no exception.
Choi Jin, the head of the Institute of Presidential Leadership, said, “Politicians use fortune-telling as a secretive yet useful means to boost their popularity.”
Rumor has it that one fortune-teller has claimed that “a pig will eat a snake” this time. Pig here can refer to Lee Hoi-chang, because he was born in the year of the pig, and snake can mean Lee Myung-bak, the leading candidate, who was born in the year of the snake.
Lee Hoi-chang started a belated independent conservative campaign last month, his third attempt to take the Blue House. He could be a spoiler.
Lee Hoi-chang’s candidacy is putting pressure on Lee Myung-bak of the Grand National Party, who is under suspicion of involvement in a stock fraud scandal.
But these issues don’t worry Lee Soo. He believes Chung Dong-young of the United New Democratic Party will win. “The stars this year say that it should be Chung,” Lee said. “Support for Chung will surge after Nov. 20 and he will see a dramatic rise in his fortunes in early December.” Lee was wrong about that surge, so we’ll have to wait about December.Lee’s fellow seers take a different line. Feng shui specialist Park Min-chan said, “Lee Hoi-chang will win. His luck is strong and he has the flowers blooming. His wife’s luck is also strong, which will help Lee a lot.”
Park noted that Lee earlier this year changed the location of his parents’ grave site for better feng shui in a bid to bring about good luck.
But the fortune-teller Kim Bong-joon gives a more ambiguous line. “In this year’s election, a candidate who is supported by a woman is highly likely to win,” Kim said.
In other words, Kim said, Lee Myung-bak will win only if he gets the support of Park Geun-hye, the former Grand National Party chairwoman who lost to Lee in the party primary.
Interestingly, Park Geun-hye started campaigning for Lee Myung-bak this week.
Public polls, meanwhile, indicate that Lee Myung-bak is the favorite, followed by Lee Hoi-chang and then Chung Dong-young.
It’s fair to say that Korean politicians take heed of what fortune-tellers say. Park Hyeong-joon, Lee Myung-bak’s spokesman, fought back against the pig-eating-snake scenario. “Lee Myung-bak’s fortune is like an invincible diamond that can never be damaged,” Park said, noting that Lee has four Chinese characters in his name symbolizing gold.
Lee Hoi-chang, meanwhile, might not be the only one troubled by feng shui factors. Chung Dong-young moved from Seocho-dong in southern Seoul to Hongeun-dong in western Seoul earlier this year. It’s said that a fortune-teller told Chung to “stay away from evil spirits in Mount Gwanak in southern Seoul and move closer to water.”
Chung’s new home in Hongeun-dong has the Hongje Stream flowing nearby.
Park Young-sun, a lawmaker supporting Chung, stopped short of confirming the rumors, but admitted, “Our camp was told several times that luck will follow us [after the move].”
Many fortune-tellers asked that their identities be kept secret because of the sensitivity of their work and their connections with politicians. What they say is presidential candidates are not shy about approaching them.
“I get appeals from candidates whenever there are elections,” one fortune-teller said. “I heard some candidates even have specially designated people to handle what fortune-tellers say.”
Song In-chang, a professor of philosophy at Daejeon University, is skeptical, though. “We can never be sure whether candidates are making up rumors based on the fortune-telling,” he said.

Chinese characters meaning fortune-telling, feng shui and the four “pillars” ― the year, month, day and hour of birth ― exert great influence in the run-up to elections. By Kwon Hyuk-jae

Korean fortune-tellers claim they can read the future by referring to the four “pillars.” The pillars are the year, month, day and hour of a person’s birth. These dates and times are thought to influence a person’s fortune.
The intimate relations between the political circle and fortune-tellers have a long history, not only in Korea but also in the world.
Park Chung Hee, South Korea’s military strongman in the 1960s and 1970s, asked a fortune-teller to choose election dates, Choi Jin of the leadership institute noted. Park, a former elementary school teacher, quit his job in education after a fortune-teller told him that his pillars indicated that he could be the country’s leader.
It’s said that the mother of Chun Doo Hwan, who took power in a military coup in 1979, was told that her three front teeth were an obstacle to bringing luck for the son. So she pulled those teeth out using a pair of pliers, according to Chun’s autobiography.
And former President Kim Dae-jung won the 1997 election after relocating his parents’ grave sites for better feng shui, just like Lee Hoi-chang recently did.
Choi of the leadership institute said Winston Churchill, Charles de Gaulle, Adolf Hitler and Francois Mitterrand consulted fortune-tellers at difficult times. “There is nothing that politicians with a strong desire for power cannot do, and it is only human for them to turn to fortune-tellers,” Choi said.
When fortune-tellers are proved right, they make the headlines. Businessman Park Tae-joon, who founded the steel producer Posco, entered politics after listening to the fortune-teller known only as “Guru Park.” Park thought so highly of Guru Park that he would use his helicopter to get to fortune-telling sessions, according to media reports at the time.
Another well-known prophesier was Buddhist monk Seolsong of the Hyeonbul Temple in North Gyeongsang. In 1996 Kim Dae-jung visited him during his presidential campaign that year, and the monk said, “You are the one.”

And he was right. From then on, Seolsong was inundated with requests from politicians to tell their fortune.
Shaman Shim Jin-song, another well-known personality in this field, forecast the demise of the North Korean leader Kim Il Sung in 1994. But she scuppered her reputation in the 2002 election when she foretold that a woman would be elected president that year.
She was wrong.
Of course, not all fortune-telling can be right all the time. A fortune-teller, who declined to be identified, predicted last year that Park Geun-hye would take the presidency this year.
“I saw the spirit of a leader within her,” the fortune-teller said. Park is the daughter of the late President Park Chung Hee, and the fortune-teller spoke of a dream in which the former First Lady Yuk Young-soo was celebrating her daughter’s election.
Wrong again. 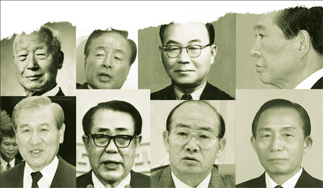 Another shaman, who also asked not to be identified, was convinced last year that former Gyeonggi Governor Sohn Hak-kyu would take the Blue House this year.
“I prayed to God to show me the future of the country, and I saw Sohn Hak-kyu walking on the peak of Mount Baekdu [in North Korea],” she said.
Sohn lost the primary to Chung Dong-young of the United New Democratic Party.
Song In-chang, the professor at Daejeon University, said that despite the dangers of believing everything fortune-tellers say, politicians continue to consult them because the general public expects a “leader appointed by the heavens.”
Whang Sang-min, a professor of psychology at Yonsei University, said leaders in Korea often need an aura of virtue.
“People have this expectation for heroic figures, and this is why ears perk up at the words of those fortune-tellers,” Whang said.