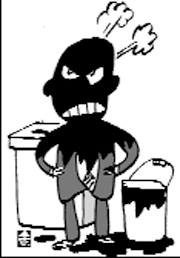 During the period that China was ruled by the Mongolian Yuan Dynasty, Zhao Mengfu was widely known as one of the best calligraphers in the country. He was the 11th descendant of Song Dynasty founder Zhao Kuangyin.
Zhao Mengfu’s wife was Guan Daosheng. She was famous for her intelligence and was credited for achieving extraordinary skill in her painting and writing, well-matched to her husband’s talents.
Their talents mixed well. Zhao Mengfu never got absorbed with concubines, unlike other aristocrats who commonly kept them.
However, their sincere faith got a critical test on one occasion, when Zhao lost himself to a woman who was a singer. He tried to make her a mistress.
Against this backdrop, his wife made an uncommon response.
When her husband asked her whether she would allow him to take a mistress, she responded by presenting a poem.
“As you and I were made from the same mud, how delightful would it be? Pouring water into it again and mixing it thoroughly, you and I would be made anew. You are inside my lumps of clay and I am in your clay figure.”
The result was unquestionable. Zhao was so shocked that he gave up his decision to take a mistress.
At any rate, the latter two phrases -- “you are inside my lumps of clay” and “I am in your clay figure” -- attained great fame all over the world.
It is a splendid remark that has had a positive influence over people’s relationships; molding the “you and me” into a harmonized “we.”
As shown in the political field in the run-up to the presidential race, it is clear that the separation between “you” and “me” is overstepping its bounds.
In this regard, we need to look back on the true meaning of the famous phrase.
Currently, the United New Democratic Party’s ads, published in some newspapers dated on Nov. 27, lead us to think we are headed for trouble.
Even though the presidential campaign is based on fierce competition in principle, it certainly goes to excessive lengths if candidates make vulgar negative campaign strategy ― especially in the form of large-scale ads.
We need to think about the aftermath of an election full of severe struggles.
I sincerely call on presidential aspirants to campaign in a calm manner, believing that the people are more eager to hear political views than malicious propaganda.