Saddle up for the sport of kings

Saddle up for the sport of kings 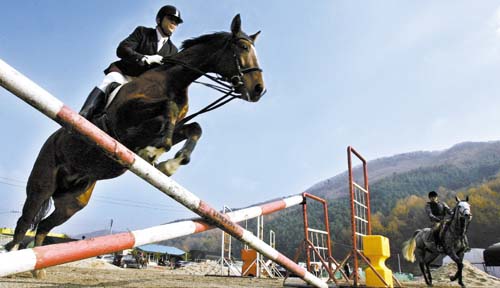 There are several clubs in Gyeonggi where complete beginners and more advanced equestrians can hire horses and take classes. By Ahn Yoon-soo

Horses have always been somewhat of a mystery for me. Like many girls I’d grown up watching Elizabeth Taylor’s perfectly groomed steed in “National Velvet” and the volatile Ginger in “Black Beauty,” with its lean flanks and silky black mane.
But what really struck me was that although they possess the strength to kill a person, horses are full of grace and poise.
Now face to face with the real thing at the Samkwang Horse Riding Club in Pocheon, Gyeonggi, last weekend, I was both frightened and fascinated by their true majesty.
“Don’t scream or show your fear to the horse,” said Hong Jung-ho, my instructor for the day, right after I let out a girly squeal trying to mount my horse. “It’s going to think you don’t know what you’re doing, which is true, but don’t let your horse know that.”
So began my first riding lesson. We started in the beginners’ ring with Hong correcting my clumsiness and lack of control. A posse of little kids rode behind me whispering, “Why is she [me] going so slowly? Cut in front of her or something.”
I was so embarrassed that all I needed were some metal braces, an ugly prom dress and a headful of Cyndi Lauper tunes to complete the scene.
After my horse had trotted around the ring for a few minutes, Hong instructed me how to bring my horse to a halt using my voice and the reins.
Already low in confidence, I had my first high of the day when my horse actually stopped when I pulled back on the reins and called out, “Whoa!” I gave myself a mental slap on the back and silently bad-mouthed the moaning kids behind me.
The next stage was to trot a little faster. “Cluck at the horse ― tsh, tsh, tsh,” Hong repeated. “Hold onto the reins tightly, sit up straight and try to catch the rhythm.”
I was trying hard but I could tell my mount was getting annoyed at my indecisive tugs at the reins. It kept shaking its head up and down, not sure if I wanted to stop or go faster. “See how the horse is moving unnaturally? It’s because you’re not asserting control. Show him who’s boss,” Hong advised.
I’ve never seen a psychologist before, but I imagine this is what therapy is like.
We eventually took a break and strolled around the riding club. The setting is humble, just three riding rings, a small stable, changing rooms and an office. The sand was damp from the rain and the pungent smell of horses mixed with the humidity of the early morning. Around us the faded autumnal hills looked bare compared to the saturated earth on which we rode.
In truth, you wouldn’t catch the Duke of Windsor riding the royal stable with his chums at the Samkwang Horse Riding Club. But at 35,000 won ($37) per lesson, there were plenty of other riders, some in groups, some with children, all trying their hand at a sport formerly associated with the upper classes.
“My little girl has been begging me to take her horse riding,” said Lee Sun-young, 34. “After searching around, I found this club. It’s affordable and near Seoul, where we live.”
Her daughter, Ji Su-a, 9, patted her chocolate-colored pony with the confidence of a skilled equestrian. When I’d patted the same pony moments earlier, it had looked ready to bolt.
“After a few lessons, she learned pretty quickly,” Lee said. “I think horses react better to younger girls. Maybe it’s because girls are more sensitive.”
Strike two, and another blow to my self-confidence.
Horsing riding is much more accessible in Korea these days. Not all country clubs require membership or charge expensive fees. Introductory lessons run throughout the year and cost around 30,000 to 50,000 won.
After my lesson, Hong showed up in full riding gear for the photo shoot. I had to do a double-take to make sure we weren’t in a Ralph Lauren catalogue. In creamy white breeches, knee-length chestnut-colored riding boots, a dress shirt and tie over a well-tailored black riding jacket, he looked the perfect horseman.
And the thoroughbred Hong wanted for the photograph was worth more than 200 million won ($214,731). Its well-defined muscles and caramel-like hair glistening in the sunlight made my horse look like an old nag.
I watched as Hong and his horse cantered around the ring, man and beast in perfect harmony and tempo. “I love it. No other sport allows for such interaction between us and animals. You’re dependent on each other, which I find quite charming.”
And with that, Hong sped off towards the hills.