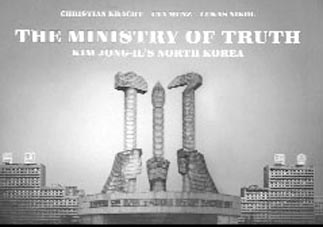 The Ministry of Truth

There are no crowds, no neon, no advertising boards. No one is sat in the restaurants and a solitary karaoke singer performs to an unseen audience. And a North Korean drinks beer alone with nothing but his Kim Il Sung lapel badge for company.
This is Pyongyang. It’s not pretty. Instead, the city as portrayed in this absorbing collection of photographs by Eva Munz and Lukas Nikol is monumental, brutal, stark and, at times, unforgiving in its desolation.
“The Ministry of Truth” ― the ironic title inspired by Orwell’s “1984” ― was the first illustrated book about North Korea and Pyongyang when it was published in German in 2006, said Nikol via e-mail from his home in Munich. The English translation came out last October.
In 2004, the two photographers and the novelist Christian Kracht visited the North as tourists.
“I went because I was curious, but I became fascinated with the North, and I returned in 2005 and 2007 to take more pictures and try to understand the country,” Nikol said. ?
Unlike most books about the North, this publication doesn’t touch upon geopolitical issues or human rights. It reads more like cultural criticism and art theory. 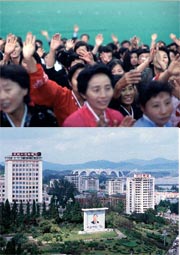 Top to bottom. North Koreans welcome visitors to the mass games in at the May Day Stadium in 2004 in Pyongyang, also shown at right. Provided by the authors

Kracht, a leading light in contemporary German literature, writes in his introduction that the North is a representation of a nation and that Pyongyang can be compared to an enormous film set.
“Kim Jong-il’s People’s Republic is a gigantic installation, a maniacal theatrical play that ... simulates an entire country.”
The citizens are like actors in a perfectly choreographed pantomime, and Kim Jong-il is the director and scriptwriter. Much is concealed, Kracht writes, and what you see is staged for the benefit of visitors, from the walks around the city to the arrival of the subway trains.
On their 2004 trip, the authors visited a film studio where they watched actors shoot a scene, only to notice later than the cameras were unplugged.
What is genuine and what is false is a theme that holds this collection together. One shot captures a crowd of North Koreans cheering specially invited South Koreans at the mass games.
“I like the picture because the people’s exultation looks at the same time faked and really true,” said Nikol, now working on a book about Pyongyang architecture.
There are no captions for the pictures. Instead, the writers comment on their photographs using selected quotes from a book purportedly written by Kim Jong-il in 1973 entitled “The Art of Cinema.”
A photograph of a dreary-looking tower block is accompanied by one such quote: “The architecture of our times is developing along the lines of an appropriate combination of socialist content with national form.”
For Kim, cinema and art are means of promoting juche, the North Korean state ideology that says man is master of everything. But, in truth, Kim is the master of everything, directing his personal 3D movie of nationhood, the authors suggest.
This is a cliche-free addition to books on North Korea, one that is both artistic and provocative. For more information, visit www.feralhouse.com.