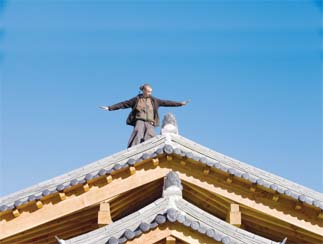 David Eisele, a German carpenter, on the roof of a hanok being built at the base of Mount Jiri in South Jeolla. The hanok is expected to be complete by the end of December. By Kwon Hyuck-jae

Fall was coming to an end at the base of Mount Jiri near the banks of the Seomjin River where a small hanok, or traditional Korean house, was being built.
The hanok is surrounded by the beauty of nature. The river flows in front and the mountain looms in the background. It is located in Baekuncheon Village, Gurae County, South Jeolla.
On a recent visit, the house was still in the middle of construction. Sawdust flew everywhere. Piles of stone and lumber were stacked around the courtyard. But there was something interesting and unusual about this hanok construction crew ― amid the thunderous noise of electric saws, a strong South American beat permeated the worksite.
Tall people with blue eyes, reggae hairstyles and a long beards were busy running around the site toting planks. The mix of language included English, Spanish and Korean. Shouts of “David! Cut longer” and “John! Trae lo aqui,” which means “bring it here,” punctured the air. This hanok was being built by foreigners enjoying an adventure in the Korean countryside, David Eisele, Nicolas Rousseau, Jeffery Lozar and John Herresa.
Eisele, a 28-year-old German, said Mount Jiri is amazing and he hates cities. He still has yet to visit Seoul.
For a foreigner who has been in Korea less than 10 months, his command of the Korean language is fluent. Eisele, who grew up in southern Germany, studied carpentry for three years after graduating from high school. He traveled around the world with money he earned from carpentry in France, Spain and Mexico.
With his global experience, Eisele was fluent not only in his native German, but also in English, French and Spanish. Thanks to his multilingual ability, one of his many tasks was interpretation among the foreigners and Koreans at the worksite.
While learning to become a carpenter in Germany, Eisele saw a video on Asian architecture and became curious about how the triangular roofs were built. During a trip to France he made friends with a 26-year-old Korean named Chan-yeon.
Eisele then visited Chan-yeon’s hometown of Busan in February of this year and traveled by bicycle from Namhae, Geochang to Namwon along the southern coast of the Korean Peninsula. 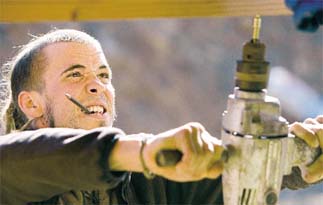 Perhaps it was destiny that during his trip he also met carpenter Kim Gil-su, who was building a hanok at the bottom of Mount Jiri. Kim decided to hire the German carpenter, who was skilled with his hands, on the spot.
When asked about the attractive features of hanok, the German said he appreciates the connections between the pieces of wood without the use of nails. He said in ancient Europe, arc-shaped structures used similar methods.
In learning about hanok construction for six months, Eisele became something of an expert ― from measuring the size of the building to smoothing lumber and fixing window frames. He earns 80,000 won ($86) a day. The German carpenter said that in Europe, carpenters earn twice what they make in Korea.
But this escapade, he says, is not really about money. Building the hanok is more about fun, friendship and a cultural experience. Eisele said his plan after the hanok is to travel the rest of Asia with the money he has earned. Other than learning the unique aspects of building a hanok, he says that the the most important value he has acquired in Korea has come from the people he has met.
He even received a Korean name that was once used by famous Korean poet, Park Nam-joon. The name the German carpenter received was “Da Bit-na,” which in Korean means “everything shines.” Eisele seems to really love his new Korean name, and he kept talking about it.
Another worker on the crew is the Canadian, Rousseau, who said he came from “Planet Earth.” The 27-year-old traveled to Korea from Quebec. When asked what his job was, Rousseau replied, “Playing.”
He said his goal is to have a life where there is no boundary between work and play. The first time he came to Korea was six years ago and he also speaks fluent Korean. The Canadian said he wanders the world, traveling back and forth between Korea and Canada and neighboring countries. Several years ago Rousseau had a temple stay experience at Silsang Temple in Mount Jiri.
While there he stayed at carpenter Kim’s house. From there, he simply followed the carpenter and started to work on the hanok. When asked if building a house was difficult, Rousseau said there is nothing difficult about playing.
Lozar, the 28-year-old American, is Rousseau’s roommate. He came to Korea almost two years ago to teach English. However Lozar said he took an interest in filming his travels and he started to wander around Korea with a camera. He loaded the video he shot and posted it on his Web site.
Although he doesn’t actually participate in the making of the Korean house, he films the building of the hanok and its beautiful surroundings.
Working next to Lozar was Herresa, a 20-year-old from Columbia, who was whistling a tune while he worked.
Herresa said it has only been six months since he came to Korea and he is already a singer with an indie band in Hongdae.
He said he doesn’t know much about hanok, but he he came to this place because he likes the people, the sound of the water flowing in the Seomjin River and the wind that travels through Mount Jiri.
Instead of actually working on the project, he spends more time creating drum rhythms on the wooden stumps piled at the corner of the construction site. He thinks of it as music.
The Colombian said that he found Korean people quite generous, adding that in Korea he believes people can live in comfort and peace even without money.
The leader of this unusual band of free-spirited international wanderers is the carpenter Kim. He runs a small private lodge for weary travelers called Seom, or island, at Baemsagol Village right beneath Mount Jiri.
A one-time school teacher at Sannae Elementary School on Mount Jiri, KIm found the classroom too confining. “A desk job wasn’t really for me,” he said. He quit his job as a teacher eight years ago and started to build hanok. His private lodge is already famous among travellers to the South Jeolla mountain for its hospitality and unusual rate scheme. Kim said that other than during the busy summer vacation season, he usually doesn’t even charge those staying in his lodge.
When his customers ask him how much it costs for an overnight stay, he just asks them, “How much do you think?” Instead of paying for the room they clean up the house and organize the utensils they have used during their stay. And that’s all there is to it.
For Kim, the fate that brings people together is to be cherished. Therefore, many people visit his lodge, and that’s how Eisele, Lozar and the others came to be working together, Kim said.

In eight years Kim has built two hanok at the bottom of Mount Jiri. He said the hanok he is now building was requested by the Korean poet Park Du-gyu, whom he met last summer.
The hanok is 100 square-meters and is expected to be done by the end this year. The poet is hoping to move into the house when the warm wind of spring travels to the Seomjin River.
“I was thinking of building a small wooden house at first,” Park said, and he plans to open the new residence to visitors since it is such a lovely structure and he feels it would be a waste to enjoy it alone.
“It is a house that is like a boat that floats on the Seomjin River,” said Kim. “I hope that the sounds of music and the flow of people will never be absent from this house.”
When the home is complete the builder and owner plan to have a party and will invite neighboring poets, painters and artists.